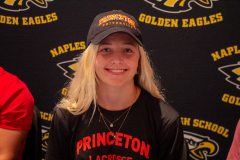 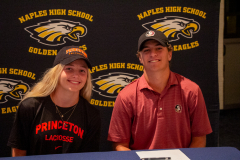 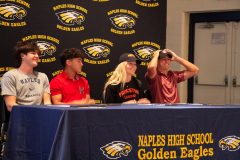 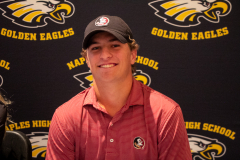 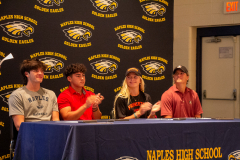 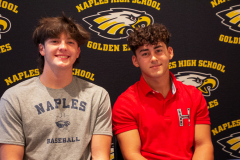 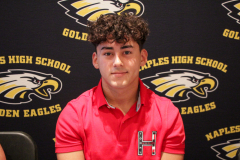 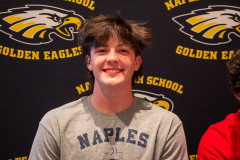 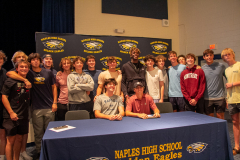 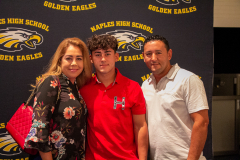 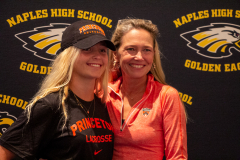 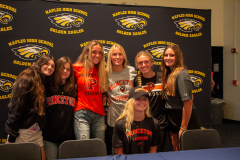 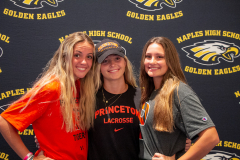 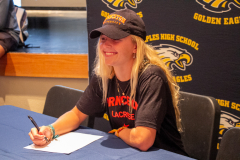 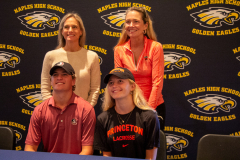 Four student-athletes signed their letters of intent to continue their athletic endeavors into college this morning.

Sam Kodak will be playing golf at Florida State University located in Tallahassee. Florida State University is a NCAA Division I school that competes in the Atlantic Coast Conference. Sam plans to pursue a degree in business. Sam is a two-time and current captain of the golf team that will play in that State Golf Tournament at the end of the week. He was named the Southwest Florida Golfer of the year in 2020 and has been named to the All Conference team each year of his high school career.

Lane Calkins will be playing lacrosse at Princeton University located in Princeton, New Jersey. Princeton University is an NCAA Division I school that competes in the Ivy League. Lane plans to pursue a degree in engineering. She plays midfield on the Lacrosse team and is a two- time captain. Upon graduation she will be a two-time Varsity letter winner in swimming, four time in soccer, and four time in lacrosse. She was awarded the NHS Student-Athlete Award in 2019 and was the 2021 recipient of the George B. Pittman Award. In 2021 she was named to the US Lacrosse All-American team and US Lacrosse Academic All-American team and a two- time Under Armour All-American. In addition to her work on the field and in the classroom, Lane is a member of JSA, the Vice President of Service for National Honor Society, and Vice President of the Student Government Association.

CJ Bussell will be playing baseball at Barry University located in Miami. Barry University is an NCAA Division II school that competes in the Sunshine State Conference. When he graduates he will have earned four varsity letters in baseball. In addition to his athletic success as a Golden Eagle, CJ earned the Student Athlete Award last year. This year, CJ will play outfield and pitch for the Golden Eagle baseball team.

Marcos Torres will be playing baseball at Flagler College in St. Augustine. Flagler is an NCAA Division II school that competes in the Peach Belt Conference. Marcos plans to pursue a degree in biology and hopes to become a chiropractor. This year, Marcos will pitch and play infield for the Golden Eagle baseball team.