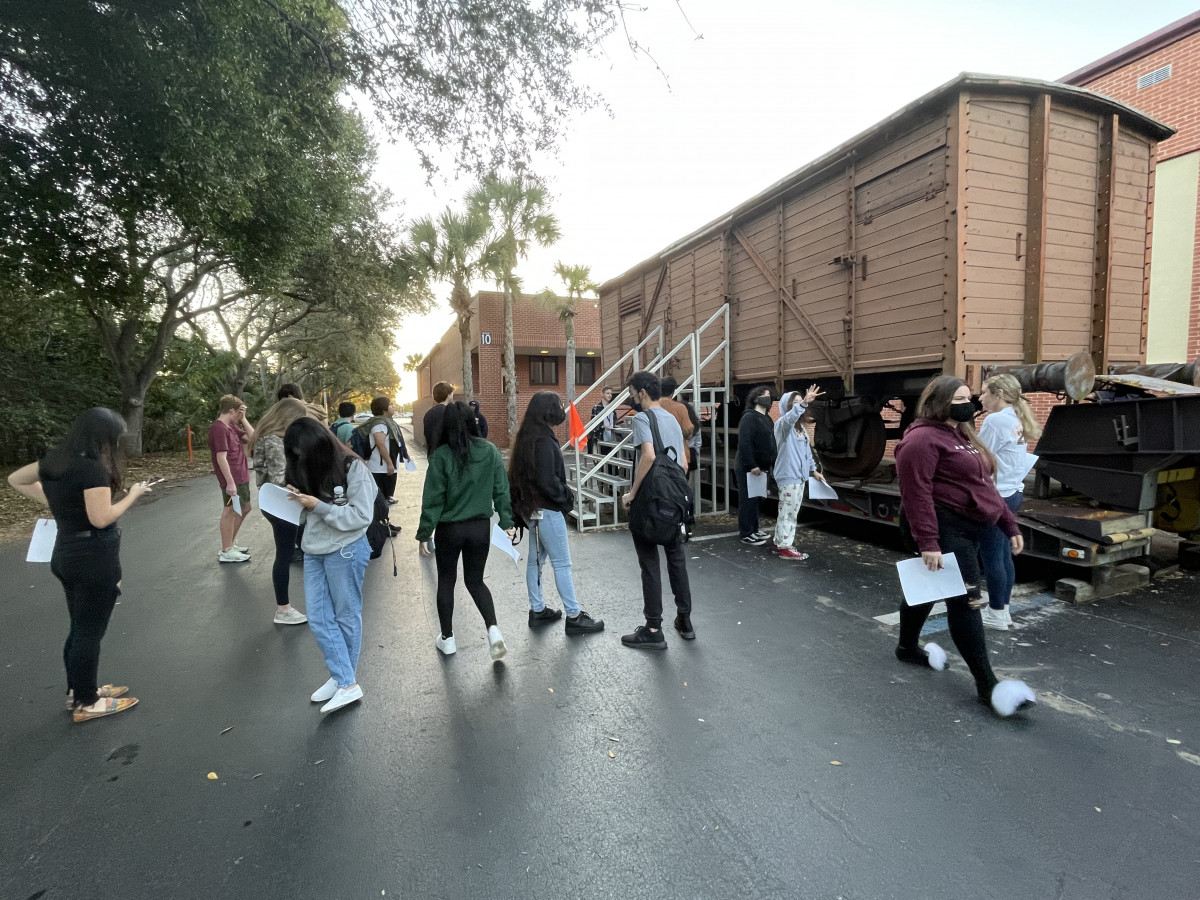 Last week, all Naples High sophomores had the opportunity to visit the Holocaust boxcar that was displayed on campus. After reading about the Holocaust in their English classes, students were able to take a step back in history and have an interactive experience with an artifact that is symbolic of countless painful stories and memories.

“We are reading Night by Elie Wiesel, and I arranged for all my classes to visit the Holocaust Museum and to meet a local survivor because my 10th graders didn’t have the opportunity to do it when they were in 8th grade,” Peterson said. “I organized with the museum to have the boxcar here for two weeks as well because I wanted them to have the opportunity to experience first-hand an authentic Holocaust-era boxcar, a symbol of the atrocities of the Nazi Regime during World War II, which resulted in the death of more than 11 million European Jews and others deemed ‘undesirable’ by the state.”

Boxcars were used by the Nazis during World War II to transport hundreds of people, mostly Jews, to death camps. Those being moved were forced to endure excruciating conditions without necessities like food, water or hygiene supplies. These inhumane environments often caused the death of many of those on board, before even reaching the Nazi camp.

The boxcar that NHS students saw is an original car that was built in 1919 to be used by the German Railway System during the 1930s and 40s. It weighs one ton and is 10 feet by 30 feet. Some parts of its structure needed to be replaced due to deterioration, but only 25% of the wood is new. It was moved to the Holocaust Museum of Southwest Florida in 2006 and often travels around for educational purposes.

Coming face to face with the boxcar after only reading about it for years is an experience that students are sure to remember for a lifetime. Many respect the value of witnessing such a key part of history and were surprised by what they have learned.

“I definitely feel that kids can take away a sense of appreciation for willing to experience what it’s like being inside the boxcar and truly wanting to understand what it was like for those who were forced to ride in it. It was definitely interesting to be able to see such a depressing part of history,” sophomore Kalea Moore said. “What surprised me the most was the simplicity of the design and how small it really was on the inside. There was little air coming through the window hatches.”

Many students had to confront the reality of how small the space was, and they were able to connect the stories they have read with their own images of the boxcar.

“It just surprised me that so many people were forced to cram together for so long, and eventually with corpses,” sophomore Ava Pacelli said. “Being in the same box car that so many victims were also in felt a little unreal.”

The opportunity to see the boxcar has left a lasting impact on many allowing them to reflect on the dreadful ordeals that Jews were subjected to.

“When my teacher shut the door, I was shocked by how fearful I felt and like I was truly alone in there,” Moore said. “To be honest, I clung to my friend who was next to me to avoid such a scary and eerie feeling of utter darkness.”

Having these educational experiences for students helps continue the mission of passing down stories to each generation, spreading awareness about the dangers of antisemitism and what hate can lead to. It is essential for students to take away the message of the importance of remembrance so such a tragic event can never happen again.

“The Holocaust is such a terrible thing to experience and the boxcar is a demonstration of just how traumatic the experience was for the millions of people who endured it and unfortunately most passed away from it,” Pacelli said. “[They were] senselessly experimented [on] and tortured for periods of time.”