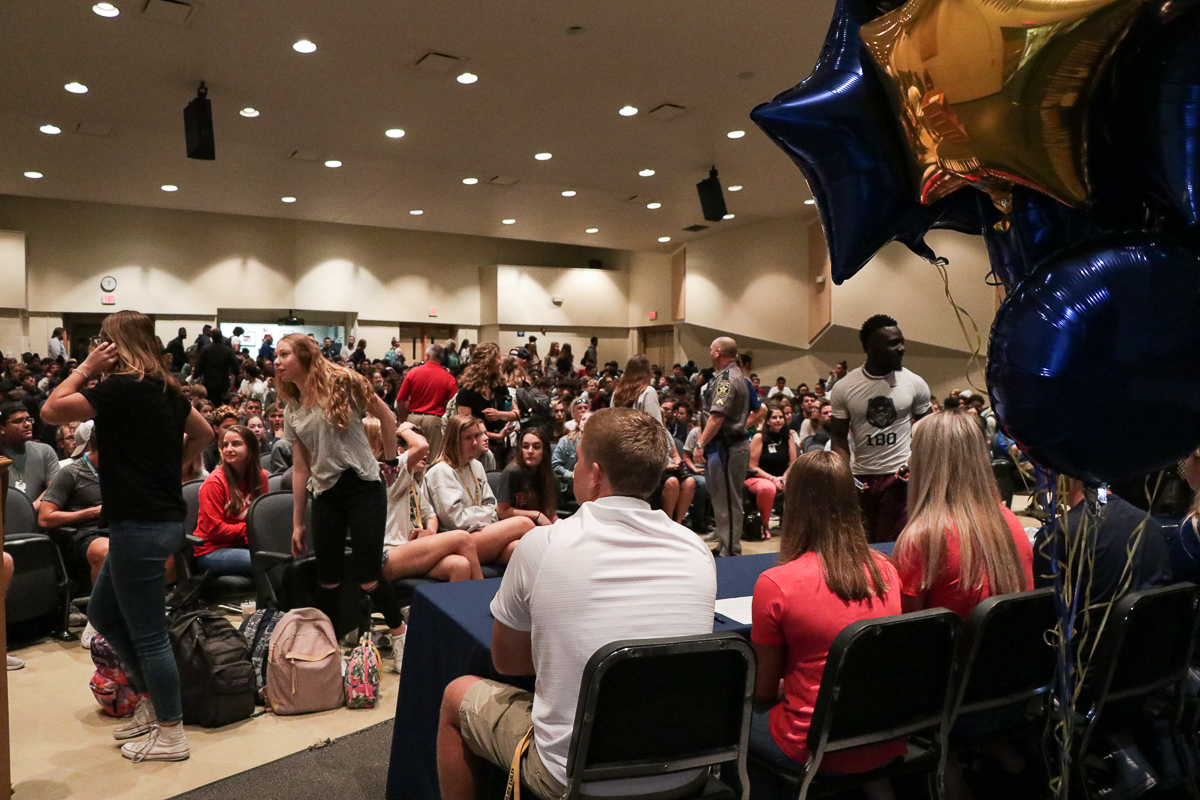 Naples High School held a national signing day in which 10 student athletes signed their letters of intent to continue playing their sport at a collegiate level.

These individuals have worked hard in school and on the field to be where they’re at today. Today was their day to be recognized for all the hard work put in and for proudly representing the school.

With 10 signees, this was one of the biggest signings and fellow students were sure to bring their support.

The auditorium was filled with students and faculty, even with numerous classes having to stand to watch.

“My biggest achievement was definitely winning my age division at the beach club,” Chad Tracy said. “It was a big confidence boost and I hope to go out and win some more events this summer.”

“I want to thank my family and coaches who helped push me to become the player I am today,” Cady stated. Cady also plans to continue her hard work on the field and in the classroom.

“My biggest achievements were placing third at states and winning SWFL player of the year award,” Moll said. “I am hoping I can help the team win a national championship while I’m there.”

In 2017 Emory won a national championship, Moll wants to help lead his new team to another one.

“I want to thank my coaches, teammates, friends, and family for everything they’ve done for me,” Kinstler said. “I couldn’t have done it without my parents immense support.”

Jill Kinstler has accomplished a lot throughout her years playing, including going to the state finals with her club team.

Senior Annalise Eisold will be swimming at Florida Southern College.

“My biggest achievement is setting the school record in the 100 breaststroke and the 200 IM,” Eisold said.

She will continue working hard to keep improving and she says a special to her coaches, family, and friends.

“My proudest accomplishment has to be qualifying for the junior Olympics,” Wright said.

Elijah doesn’t know for sure how the future will turn out, but trust the process and keep an eye out for him.

Senior Max Hussian will be playing football at Eastern New Mexico University. Hussian made a big impact for our Naples Eagles this season and will continue to be an impact player in college.

Senior Marc Viechec plans to play football at the University of West Florida.

“I want to thank coach Dollar, Martin, Kramer, and all his teammates,” Viechec said. Marc is going to work nonstop to achieve his dream of playing in the NFL.

“My biggest achievement I would have to say is definitely getting a full ride to a southeastern,” Denelus said. “I’d thank God for helping my decision come clear and also my coaches coach Dollar coach Kramer and coach Greer who’ve assisted me in the process and getting the interests I’ve received.”

Senior Jack Bole will continue his career in soccer at the University of North Carolina In Greensboro where he plans to major in business. Bole is a four year varsity starter and has been selected to play in the Senior All-State All Star game in Tallahassee on March 2.