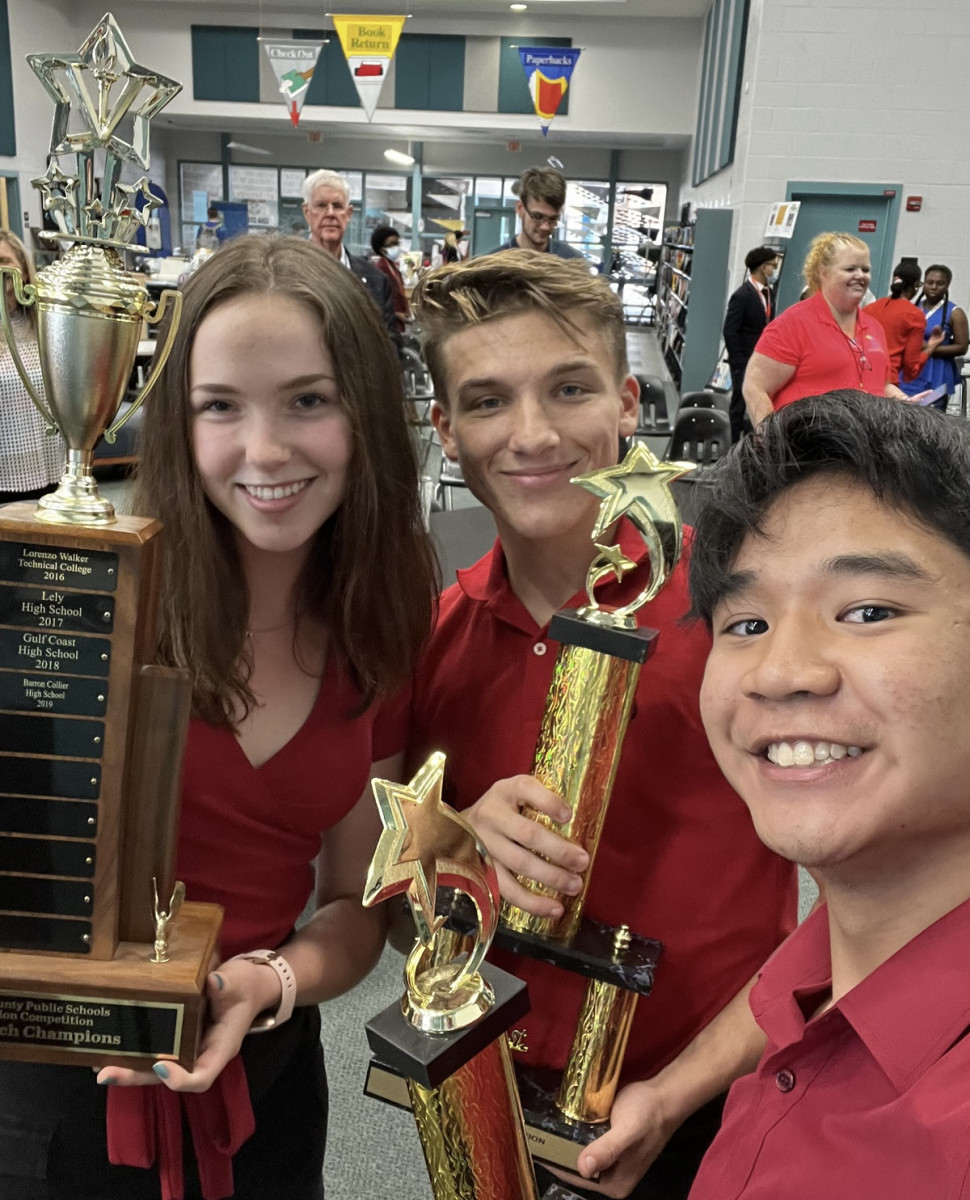 “My group decided to work on the issue of not getting out of bed in the morning and how alarm clocks are too easy to hit snooze or turn off,” Hyer said. “So we decided to come up with a solution for that.”

The group came up with an alarm clock that uses a fluorescent light, requiring people to get out of bed and manually turn off the light switch. Only then would the alarm turn off as well.

“Natalie had a problem with her brother and how he doesn’t get up from alarm clocks,” sophomore Daniel Huynh said. “I suffer from the same problem, so that’s how we came up with our idea.”

Even before Huynh and Hyer were in the same group together, they both knew they wanted to address the same problem. It just so happened that they grouped together at the beginning of the year.

“The competition is a combination of the entire year, so the students break up into teams at the beginning of the year based on their interests and personalities,” entrepreneurship teacher Luke Garcia said.

The group had to give a ten-minute speech talking about their project, pitching their idea to a panel of judges like on the show Shark Tank. Groups go through marketing size, how many people they think they can sell to, the cost of making their product and the profit domain. Winning first place has been a great honor for the students.

“We’ve been working on the project since the end of August, so it feels really good to see the hard work pay off,” Hyer said.

The group was surprised to have won first place after their journey to the competition.

“I was honestly really surprised because before [our last competition] we did another trip to FGCU, where we didn’t place,” Huynh said. “Once we actually got first place we were like, ‘oh wow we’re actually really good at this.’”

Not only has it been an amazing achievement for the students, but their teacher has been very proud of the group as well.

“It’s pretty exciting, I mean we’re competing against eight different teams,” Garcia said. “One of them, Lorenzo Walker, has a really good team. They have a dedicated entrepreneurship program there, and our students really worked hard. It’s a testament to the students and their mentors that are helping.”

Students spent a long time creating the concept, working with an engineer to put together a functional prototype and putting together a presentation.  During the process of creating their project, they had some parts that were more difficult than others.

“The financial structure was kind of a pain in the butt, because we had to look at every single part that we used for the prototype,” Huynh said. “The prototyping was actually pretty easy because our mentor Craig has a son who is an engineer, and he kind of built the prototype for us.”

With the district competition under their belt, the group is excited about what the future possibly holds in store for them.

“It feels great, I’ve never won anything this big in my life before and there’s a possibility that we’re going to Chicago in the summer, so it feels amazing,” junior Adam TerBush said. “The Chicago competition is just a bigger competition with winners from across the country. I’m really excited for it and I hope we do get to go there and win.”

Seniors find out what is needed to graduate and more