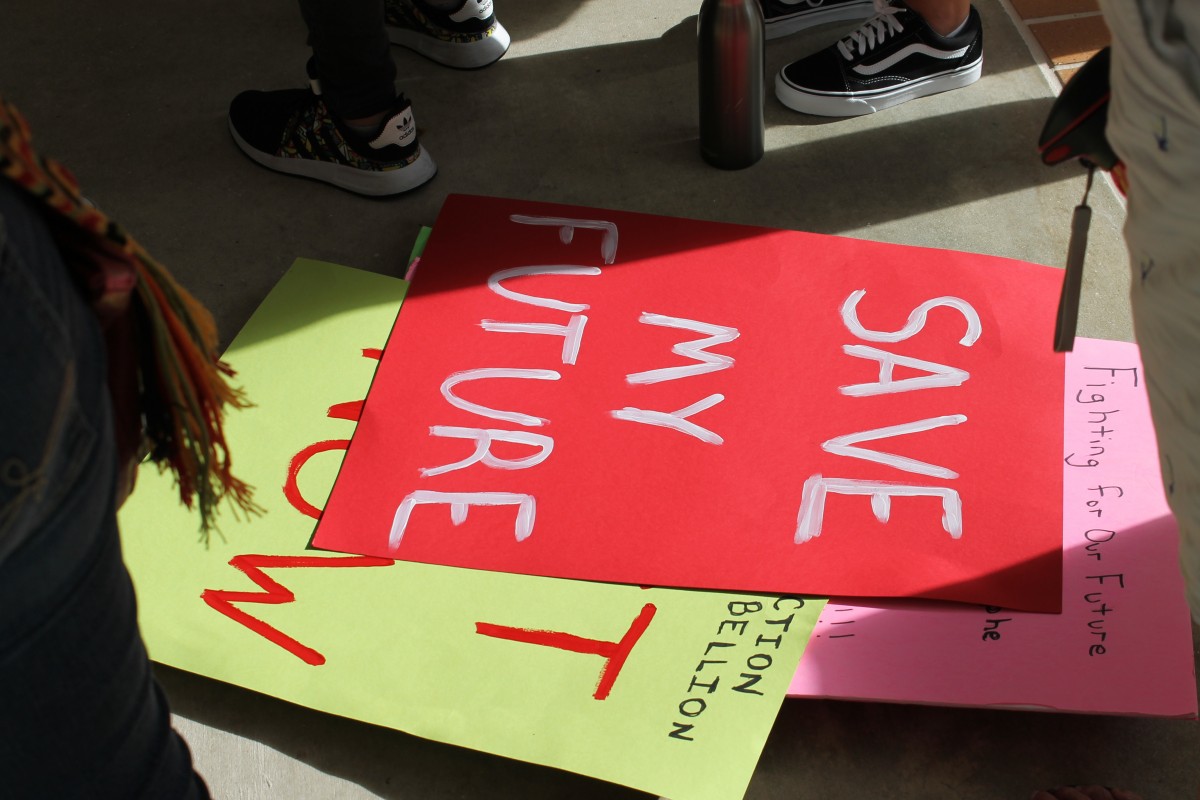 The face of climate change is no longer being associated with the old man, Al Gore, who is yelling at the clouds, but instead it’s taking on many faces of a younger generation. With the younger generation taking control, the effort is becoming rejuvenated and starting up again stronger than ever.

A group of protesters gathered to strike at Naples City Hall on behalf of the climate crisis on Sept. 20.

The strike at Naples City Hall was one of many taking place all over the world the weekend of Sept. 20.

The effort was led by Saffron Millar, a junior attending Seacrest Country Day School. She was inclined to coordinate the strike at Cambier Park after realizing there was little to no effort or awareness in Southwest Florida.

The event was inspired by the global effort to bring attention to the climate crisis involving concern over rising water levels and temperatures around the world.

“After checking World Climate Strike, I noticed that there was only one event taking place here in Florida,” Millar said. “So I took the challenge of organizing a strike on the west coast of Florida.”

It is up to the younger generation to grab the torch and continue the climate relief effort. Getting involved doesn’t have to mean coordinating a protest though, it could be as simple as reducing the use of single-use-plastics, and reducing personal use of fossil fuels.

The climate strike was just one way to bring attention to the issue, but it is the duty of the public to be concerned with public issues and affairs.

“Attending local beach cleanups and meeting locals can be a super helpful and an easy way to get involved,” Millar said. “It’s really important for people to be aware of the climate crisis and are educated about what they can do.”

There are many ways to follow the climate crisis movement, which include being more active on social media. Many social activists use social media as a means to share informative, some of those pages include: usclimatestrike , Greta Thunberg, Autumn Peltier, Xiye Bastida, and Mari Copeny also known as “Little Miss Flint.”

Getting involved in planning events such as this one are important in spreading the word about the steps communities can take to bring these issues to local government and organizations. It only takes one person to start a movement, so even the small acts like talking about the topic go a long way.

“Find local nonprofit organizations in your community that benefit real causes such as the Global Climate Strike,” Millar said.

The gratification that comes from planning an event like this is payment enough for Saffron.

“My favorite part was probable seeing the turnout of people showing up, it was incredible to see all my hard work come together,” Millar said, “I’m looking forward to arranging several more events in the upcoming year.”

Researching the topic of interest is important to make sure that the most is being done to help the relief effort. Spread the word and approach the issue with complete certainty of any steps people can take to make a difference, no matter how small.

“It is very important to completely understand and be properly educated in a cause you are interested,” Millar said. ”Whether you reach out to local experts, take a class at a school or local college these are all good ways to ensure you have the right knowledge to take further action.”