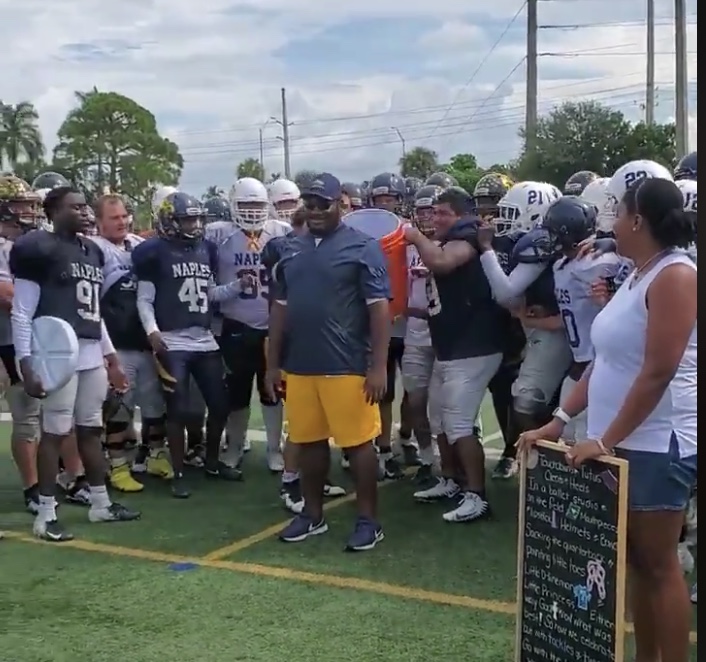 Luckily for Naples’ defensive coordinator Cliff Greer, it was the former.

Coach Greer’s wife, Kami Greer, decided to help her husband cool off after last Wednesday’s practice with the help of the football team, some Gatorade and Naples’ head coach, Bill Kramer.

My wife surprised me with a gender reveal this morning with the assistance of my #Trenchbullies and @CoachBKramer. Happy I could share this moment with my guys. Excited for my baby girl coming this spring!!!👶 @NDN_Adam @NDN_PrepZone @AMcDevittTV @FlaHSFootball @NHSEaglesNews pic.twitter.com/N9hmHqTlE9

Football players surrounded Coach Greer as the reveal was about to happen.

If the Gatorade spilled on him was pink, it’d be a girl; if it was blue, it’d be a boy.

As the players hoisted and tipped the water cooler, pink Gatorade showered over Coach Greer’s shoulders.

“I decided to do the gender reveal this way because it is our last baby and I wanted to really surprise him,” stated Kami. “We are in the midst of football season and the players/coaches/wives are like our extended family, so I thought it would be a great idea to incorporate them!”

Kami found out what the gender would be the morning before, which sparked the plan of doing the reveal the following day after practice.

“I found out Tuesday morning and texted back and forth with Mrs. Kramer to get it all set up, and then we (my sons and I) snuck to the school during Wednesday’s morning practice to surprise him,” Kami said. “Coach Kramer was in on it as well, and knew to gather the team before they went to the locker room.”

Everyone was excited and struck with awe during the reveal. Kami was the only one to know the gender prior to that day.

“Coach Greer is usually very laid back so I didn’t expect a HUGE reaction, but his smile was priceless,” she said. “I also LOVED the reaction from the players as I didn’t expect so many of them to chant ‘Pink! Pink! Pink!’”

Football players enjoyed the gender reveal and thought it was a great idea.

“It was a great idea, I enjoyed watching it happen,” senior Elan Sommala said. “I’m really happy for Coach Greer and his wife, wishing them nothing but the best.”

Coach Greer’s tweet of the reveal has since received a lot of attention and congratulations.