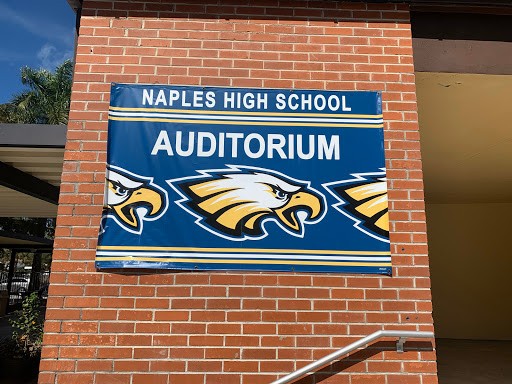 NHS theatre students performed The Brother Grimms’ Fairy Tales in the auditorium on Jan. 31 and Feb. 1. Every character from giants to dwarfs to princes to toads took the stage. However, there is more to these performances than meets the eye. Behind the scenes, is a whole other story.

A lot of work goes into the making of a show. Actors rehearsed from 3-8 p.m. for four days during the week of the performance.

Sophomore Jeremiah Olander brought the Frog Prince and a dwarf to life on stage. He said that he was confident and prepared for the show.

“I believe I personally [was] prepared,” Olander said. “I think we should’ve rehearsed and gotten the scenery and props sooner though.”

Sophomore David Santiago also thought he was well-rehearsed. He played a plant and a king. He showed that sometimes an actor must think on their feet, even if they think they are ready for anything.

“I was prepared up until I forgot my lines,” Santiago said. “Then, I had to improvise.”

“I lose many hours of sleep, and I couldn’t commit to that if I didn’t love it, especially seeing the excitement on the students’ faces,” Quintero said.

Olander, Santiago, and Quintero all agreed that a lot of work was put into this production. With all that prepping, it eventually comes time for the show, and most students have the same mindset.

“All students are nervous before a production, but before we start the rehearsal process I stress the importance of rehearsing and putting forth the effort,” Quintero said.

The actors are nervous, but they try to keep a clear mind and go over their lines one last time before going on stage.

“I was very nervous sitting in the audience; I was the plant,” Santiago said. “My head was dizzy, but once I got up there I started feeling better.”

Much work goes into these plays, but all the butterflies, adrenaline and rehearsing appears to be worth it. The audience is entertained and the actors are doing something that they enjoy.

“I love acting; it’s my passion,” Olander said. “I get to express who I am and make people laugh.”