NHS Talon Tribune
Home News 2020 Election: How and where to vote and the importance of voting 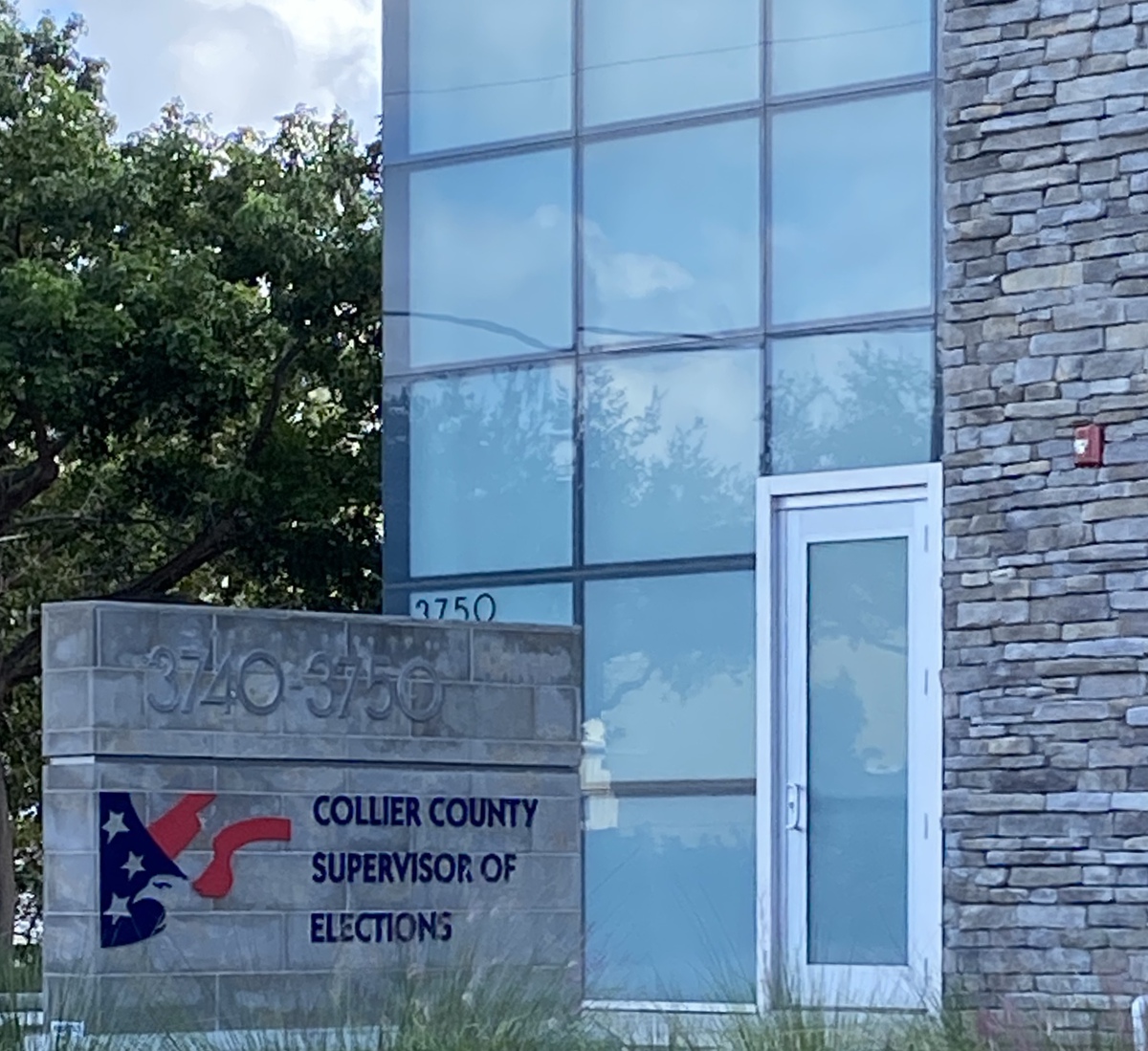 Conventions, campaigns and debates have flooded the media for the past few months, and voters can finally make their voices heard on Nov. 3 when the presidential candidates reach the final stage of this historic election.

Collier County has several ways residents can vote and it’s crucial to be informed about them to be able to decide which option is best for you.

The different voting options are Vote-by-Mail, early voting and going to the polls on Election Day.

Anyone who plans on voting in the 2020 Presidential Election must register to vote before the deadline of Oct. 5. Registering is simple to do and may be completed online at Florida Online Voter Registration System or at the Supervisor of Elections Office at 3750 Enterprise Avenue in Naples. Voter application forms are also available at public libraries and city halls.

In order to Vote-by-Mail, you need to request a ballot by 5 p.m. on Oct. 24 by filling out the online form at Vote-by-Mail Ballot Request Form.

Vote-by-Mail ballots may be returned by mail or brought to a drop box location. When using a drop box, ballots must be returned to the Supervisor of Elections Office by 7 p.m. on Election Day or the North Collier Government Center by 6 p.m. They may also be dropped off at any early voting site during the early voting period.

When filling out the ballot, it is required to include the contact information, either phone number or email address, on the back of the slip.

“After they receive the ballot, they can place that in the provided secrecy sleeve and into the return ballot envelope,” Public Relations Officer for Supervisor of Elections Trish Robertson said. “They must sign the back of the envelope, and we request they sign as they would on their voter registration.”

The ballot will only be counted if the signature is the same as the one on record with the registration. If they don’t match, the Supervisor of Elections office will contact the voter.

Voting by mail is a safe and reliable method of casting your vote, and many people have opted towards this option due to COVID-19.

Early voting allows voters to cast their ballots prior to Election Day at nine designated locations throughout the county. Early voting is from Oct. 19-31, 9 a.m. to 6 p.m. daily. All early voters must vote in their county, but are not required to vote in their precinct. Voters may go to any of the following locations:

Voting In Person on Election Day

On Election Day, the polls will be open 7 a.m. to 7 p.m. Voting at the assigned precinct of legal residence is required. To find a location, voters may use the Precinct Finder or call (239) 252-VOTE.

The Supervisor of Elections has issued several safety guidelines to prevent the risk of COVID-19 at polling locations. Several supplies, including masks, will be available for those who request them. Masks are not required for voters.

“We have PPE (personal protective equipment) provided for our election workers and some for voters as well,” Robertson said. “We also encourage our voters to socially distance and wear a mask to remain safe while voting.”

Another way of voting is going to the polls on Election Day and this way is considered the traditional way by some.

“The best way is the old fashioned way- voting at the voting stations, in person, on early voting days or on Election Day,” Fowler said. “The next safest way is to deliver the ballot either to an official ballot box outside the nine early voting stations or taking your ballot directly to the building of the Supervisor of Elections.”

There is a wide spectrum of opinions spanning across both political parties, as well as within parties, about what the best way to vote is. As a result, there is no universally definitive answer to what the best method is.

“There is no preferred method, simply what suits the voter most and makes it easier for engaged citizens to participate in democracy,” Chairman of the Collier County Republican Executive Committee Russell Tuff said.

Due to the uncertainty that we are currently in, there has been much speculation about when the American people will know the results of the election. COVID-19 has greatly altered the way people are voting this year and this may very well affect the time it takes to get results in.

“Years ago, most people voted at the voting booth and, unless there was an unusual problem, winners were known the night of the election,” Fowler said. “This year, because of the virus, mail-in-ballots have more than doubled. Unless there is a landslide for either side, we could have to wait at least one or two weeks.”

A landslide occurs when a candidate receives an overwhelming majority of the votes. If this isn’t the case, there could be legal action implemented to decide the results.

The 2020 Election revolves around several key issues and political platform policies that greatly affect our nation, including the pandemic, healthcare, the Supreme Court, racial equality, public safety, climate change, and the economy.  Being informed about each party’s stance on these issues will help voters decide which candidate to vote for. The Democratic platform can be viewed on Joe Biden’s website, and the Republican platform is on the White House’s official page, as well as in the Collier County Republican Executive Committee’s voter guide.

Florida voters will also vote on six proposed amendments to Florida’s Constitution on the general election ballot. These amendments have policies regarding citizenship for voting, raising the minimum wage, voting in primary elections, voter approval of constitutional amendments, property tax portability, and veteran survivor benefits. Voters in Collier County will also have to vote about a tax increase for conservation land. The Florida Chamber of Commerce has additional information about the contents of each amendment. The Republican guide and Democratic guide contain each party’s position on the amendments.

Being knowledgeable about key topics will help people vote in a way they think best represents their beliefs and any plans they might have for their community.

“Educate yourself about issues that matter to you so you can make a good argument for any cause you believe in, even if your position differs markedly from positions held by those officials who [in theory] represent you,” Volunteer Coordinator and Board Member of the Democratic Women’s Club of Marco Island Lisa Furlong said.

Following credible news sources helps shed light on important matters, and the press provides the government transparency that people need in order to make informed decisions prior to this election.

“To stay informed, follow officials via their websites and trusted media. Regardless of whether you are liberal or conservative, be sure to read opposing views,” Furlong said. “Don’t trust social media unless it is reliably sourced, and fact-check what you read. Sites like factcheck.org as well as independent research can be very helpful in distinguishing fact from fiction.”

No matter what method of voting you choose, casting a vote is extremely important for this pivotal election.

“One of the most important things to remember and realize is that we must stay involved, engaged, and informed in order to make intelligent and thoughtful decisions, “ Fowler said.

Voting not only allows people to be responsible citizens, but it ensures that everyone is represented in the government.

“Voting is a way to keep our government in check,” Ruff said. “The fewer people that vote, the more elected officials have the opportunity to run their agenda, versus the publics. Voting keeps political leaders in check, and by choosing our elected leaders, we as citizens determine the direction our country should head.”

The right to vote gives us the opportunity to build a foundation for a better future for us and for future generations, and it is up to each of us to abide by this responsibility.

“Voting is a privilege extended to those fortunate to live in a democracy and should be embraced as such not only to express one’s views and secure representation for those views, but also to safeguard a country from leadership at odds with its expressed values and ideals,” Furlong said. “Anyone who has the right to vote and doesn’t isn’t really vested in what happens and, in essence, cedes decision-making to others.”