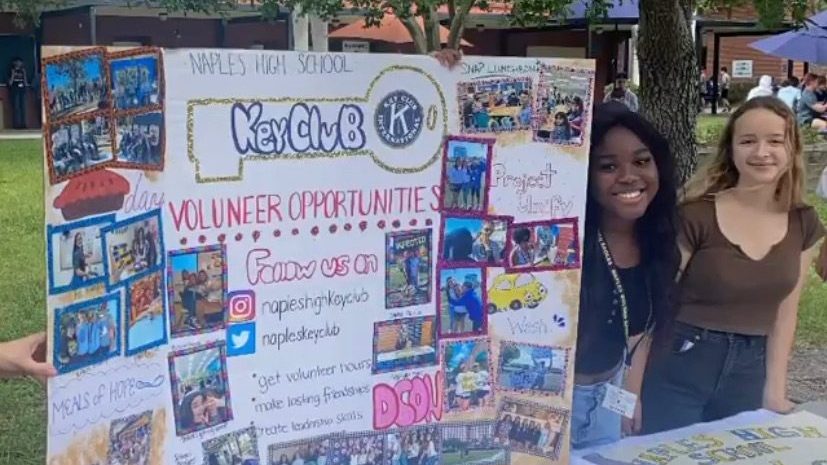 Club Rush is back! A yearly NHS tradition that was painfully absent last year due to COVID-19 social distancing protocols. The absence of having in-person club rush last year resulted in a lack of participation and connectedness in the majority of clubs. Fortunately, not all clubs suffered from this, but in return it made room for new clubs to pop up!

Students were able to sign up during lunch on Wednesday and Thursday. There was a whole array of clubs for students to choose from, including the ever-popular Scholar Bowl.

“This is an academic competition club, so most of the students are very intelligent and gifted academically,” sponsor of Scholar Bowl Deborah Cantor said.

There is a club for everyone, whether they are looking for a competition club or a more laid back one like Comedy Club. The Comedy Club is one of the new clubs that Naples offers. They meet every Tuesday to rehearse skits

“We will be performing and trying to make people laugh, in front of an audience instead of just a secluded member- only kind of experience,” Keegan Noviski said.

If students are looking more for a club that offers them to get hours they could join a club like Key Club.

“Key Club is different from other clubs because we focus more on community service,” senior Taissah Marc said. “We also like to get non-members involved. And we are also a nationally recognized club.”

A meeting for the Key Club would typically involve members going over what upcoming service projects they have going on. Similarly, Tom’s Club provides students opportunities to get community service hours.

“We do a lot of volunteering for the less fortunate, and just kind of make it really fun for students to also engage in.” senior Angelica Perez said.

Tom’s Club meets every Monday and sometimes Wednesday during lunch. During the meetings, students discuss what their next project will be and which charity they should raise money for.

Students join a club for many reasons, some students’ reasoning for joining a club can be straightforward and simple.

“Well, it’s a good way to get volunteer hours, and I’m in desperate need of them,” junior Ethan Smith said.

While some students are joining clubs for the sole reason of volunteer hours others are doing it for their own pleasure.

“[I’m] joining [Mu Alpha Theta] because I am really good at math and I know some of the people in the club,” senior Jake Kulikwarren said.

Some students join clubs to be able to have fun with their friends, and some may just want to challenge themselves. They are a  good way for students to dip their toes into an activity they may have an interest in.

“I wanted to explore something new and it [JSA] will teach me about politics,” Sophia Bosco said. “They say they go places and I really want to go outside more.”

Additionally, some clubs offer the experience of going on field trips, both in state and out of state, which helps make the club more engaging for students. Club Rush has been helpful to many students in finding something they are passionate about, as well as find where they fit in.

“To me, Club Rush is a great way for students to find an extracurricular activity that suits their personality,” Smith said. “The experience means something to me because it allowed me to find a group that I can relate to.”

A trend that will last a lifetime