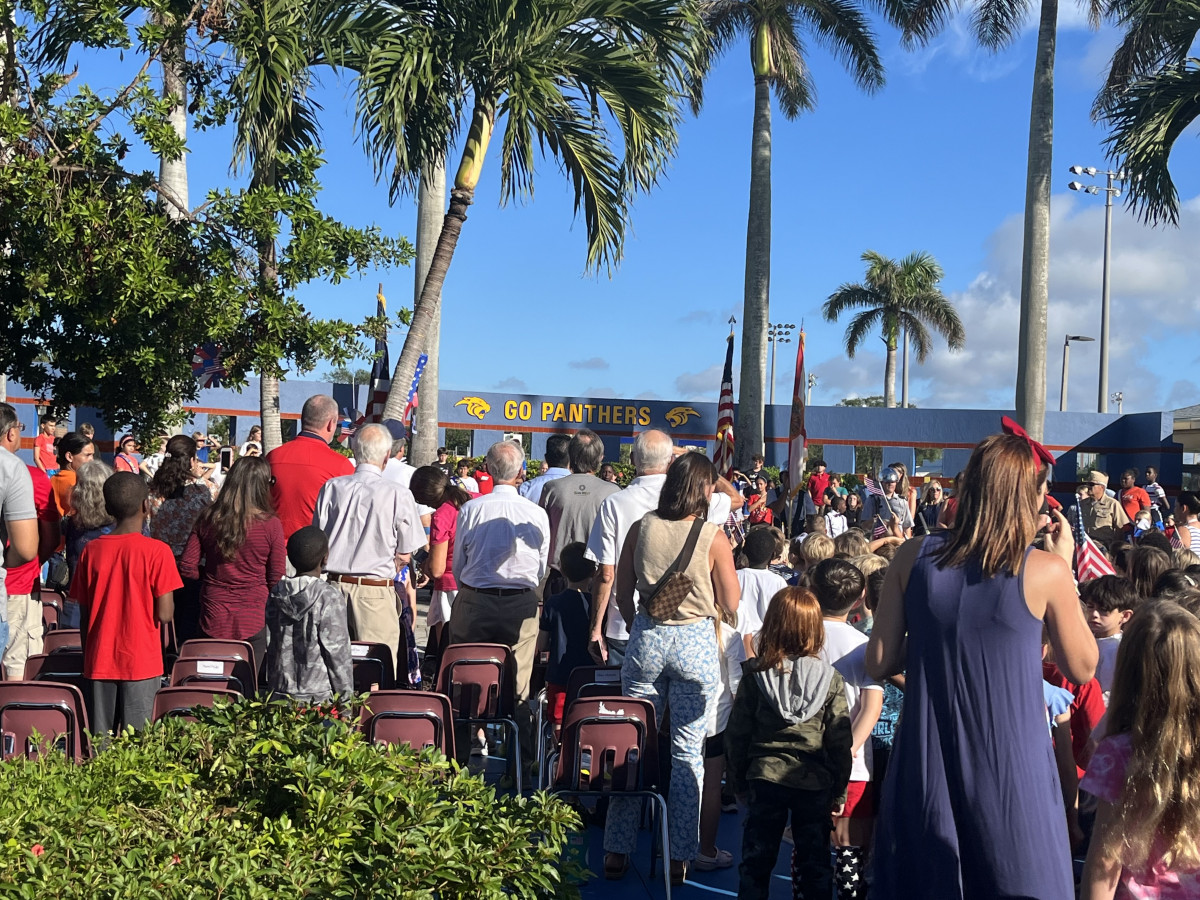 To commemorate those who have served in the military, JROTC members participated in various Veterans Day ceremonies around Collier County. Cadets traveled to NCH Baker Downtown Hospital, Lake Park Elementary and Cambier Park to honor the sacrifices that others made. Leading up to the week of Nov. 11, the color guard and attending cadets spent their time ensuring that a proper tribute will be made.

On the morning of Nov. 9, a Veterans Day ceremony was held at the NCH Baker Downtown Hospital. One of the organization’s main values is to serve as a support for veterans and their families in the commmunity. Cadets play a significant role in honoring former active members of all military branches by posting the service flags.

The ceremony has a distinct characteristic that differentiates itself from the other events held. The employees at NCH are strongly tied to the celebration as they personally have experienced active duty.

“There’s a lot of people at NCH that work there who served in the military,” Lieutenant Colonel Paul Garrah said. “We’re here to honor them as well as the other veterans.”

On Nov. 11, JROTC presented a color guard at Lake Park Elementary School. With a routine similar to the performance at football games, the cadets honored the veterans as the Pledge of Allegiance played. Students at LPES created murals and made crafts to welcome veterans to their school campus.

The practices organized after school and at LPES largely contributed to the success of the color guard presentation. All cadets on the team understood the significance of the national holiday and their role in the ceremony.

“I believe it’s important to honor veterans on this national holiday because it is a way to show appreciation for those who fought for our country,” First Sergeant Myiah Darrant said.

The second event that occurred on the morning of Nov. 11 was the annual Veterans Day ceremony at Cambier Park. The ceremony was hosted by the Collier County Veterans Council and invited all members of the community to join. The cadets were responsible for folding the flag 13 times and placing it next to the Prisoners of War, Missing in Action monument.

“Participating in an event like the Cambier Park ceremony allows people to see a small portion of what our program does to celebrate our community,” Battalion Commander Daniela Vera said.

The opportunity to be involved in these ceremonies meant a great deal to many cadets. The lessons learned throughout the JROTC program are irreplaceable, impacting the way members view veterans and those who have served.

“Our instructors are retired veterans themselves and have told us many stories, so we all get to see what a veteran’s life is truly like,” Vera said. “We have truly learned to respect our country and our veterans, and participating in events is just our way of saying thank you.”