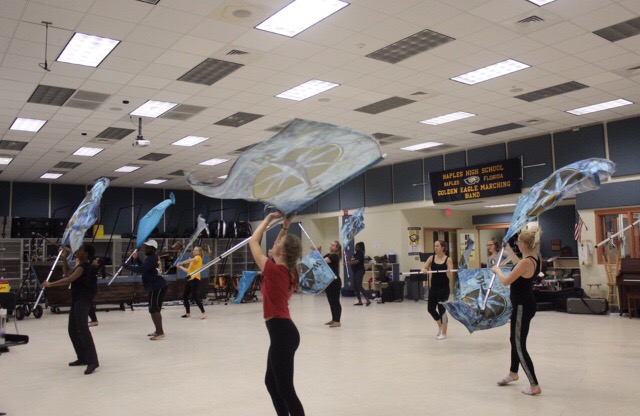 There’s no better time for winter guard tryouts than the beginning of winter. On Dec. 28-29 from 6:00-8:00pm, auditions to make the winter guard team were held.

The official winter guard season started in January with the team’s first show. The show includes, dance, spinning flags, rifles, sabers, and pretty much anything that could spin according to Ms. Garcia, the winter guard choreographer.

All of the shows will take place inside a gymnasium, where the team will perform to a piece of music instead of a live band, such as in color guard.

“It takes effort and determination and you have to kind of know how to spin a flag, but if it’s your first time, that’s obviously not bad,” Ms. Garcia said. “You could still make the winter guard as long as you’re trying.”

Some of those attending tryouts were nervous, but others were just feeling good and ready for auditions.

“I stayed after school and practiced a lot with my friends,” Phoebe Najeura stated.

Soon after auditions the girls who made the team will get a callback from Ms.Garcia to know they made winter guard.