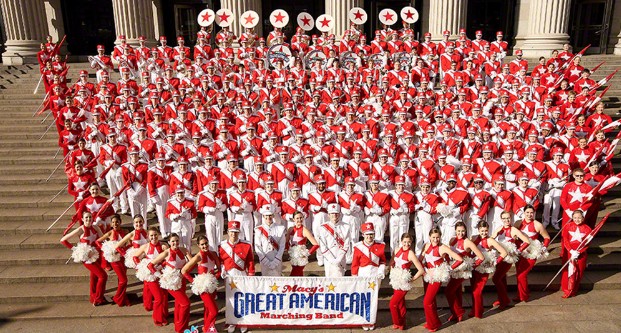 During the parade, the duo marched in 20 degree weather in front of more than 50 million people. Some of the small things impacted the performers more.

“Some things that stood out to me was the attention to detail at rehearsals and the overall experience with the staff who had a focus on the performer experience as well as the quality of the performance,” said Mixon-Saiyah.

The All-American Band performed “Respect” and “Think,” classics from the iconic Aretha Franklin. Not only did they perform in the parade, “Think” was also played later that day in Herald Square.

This performance was no small feat though, performers underwent challenging auditions, followed by rigorous and time consuming rehearsal and practice.

Music had to be memorized before arrival at New York, and the members spent four days in the Big Apple rehearsing the music and marching drill.

“I had to audition to be a member of the Macy’s Great American Marching Band, and I had to submit videos of myself doing marching techniques and playing a piece of music,” said Capiola. “I was so excited when I found out I was chosen, this is a very high-level band with kids from all over the country.”

“I’m really excited for Johnny and Lily and everything they’ve done, that’s a lot of hard work to achieve what they did,” Burkett said. “That’s the type of hard work we want from all of our students.”

Ivy day: What dream colleges are our senior Eagles hoping to...