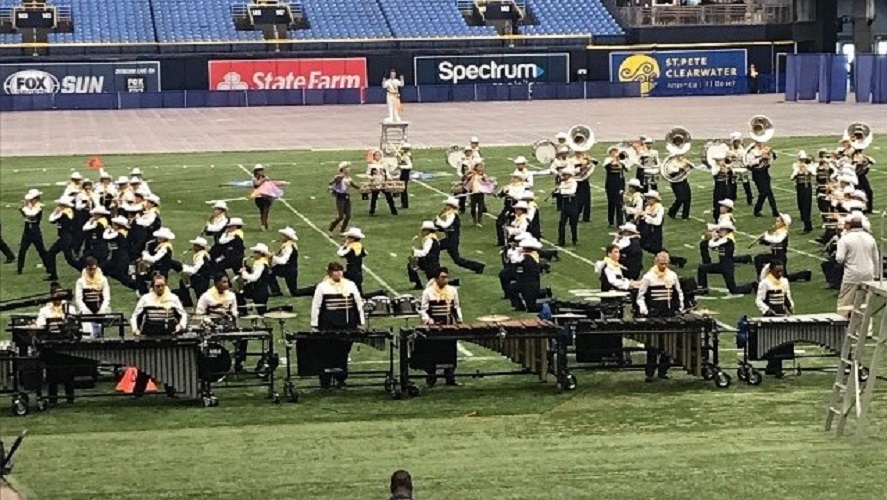 One regional and two district competitions later, the Golden Eagle Marching Band headed to Tropicana Field to perform in a state competition hosting 91 marching bands from across the state, plus two from South America on Nov. 17.

After moving victoriously through their circuit this season, the Golden Eagles performed in semifinals with the other 4A bands. Last year the band received 11th place.

“We have a different band this year,” Golden Eagles Band Director Brian T. Grieb said. “It’s more focused, our kids are more engaged, more excited. They worked harder, the music is harder, the drills are harder, the choreography is harder, and I believe that will improve our score.”

In contrast to last year, the NHS band has experienced quite a few changes. Along with new members and new leadership, the band is going to the Wild West with music from the Magnificent Seven and featuring Bon Jovi’s “Dead or Alive.”

The show focuses on a sheriff keeping justice in a small town, complete with a bank robbery and a cop and robber fight atop a wagon.

“Our band is a premier band and has had excellent leadership for years and I think it’s great that they are being recognized,” physics teacher Corey Stewart said.

However great the show, what most band members look forward to is competing with classmates. The members have been working together since summer on this show and have gained a strong pride in both their hard work on the show and in their teammates.

“My favorite part last year was the bus ride back,” Color Guard member Amanda Fuenzalida said. “We finally were able to have the satisfaction of trying our best and finishing season.”

The band performed their full show at the Nov. 16 football game in their section shirts and shorts, saving their uniforms for the next day.

“I know the band is capable of great things, but I’m not entirely sure what to expect because I’m not sure about the competition,” junior Drum Major Kalee Samson said.