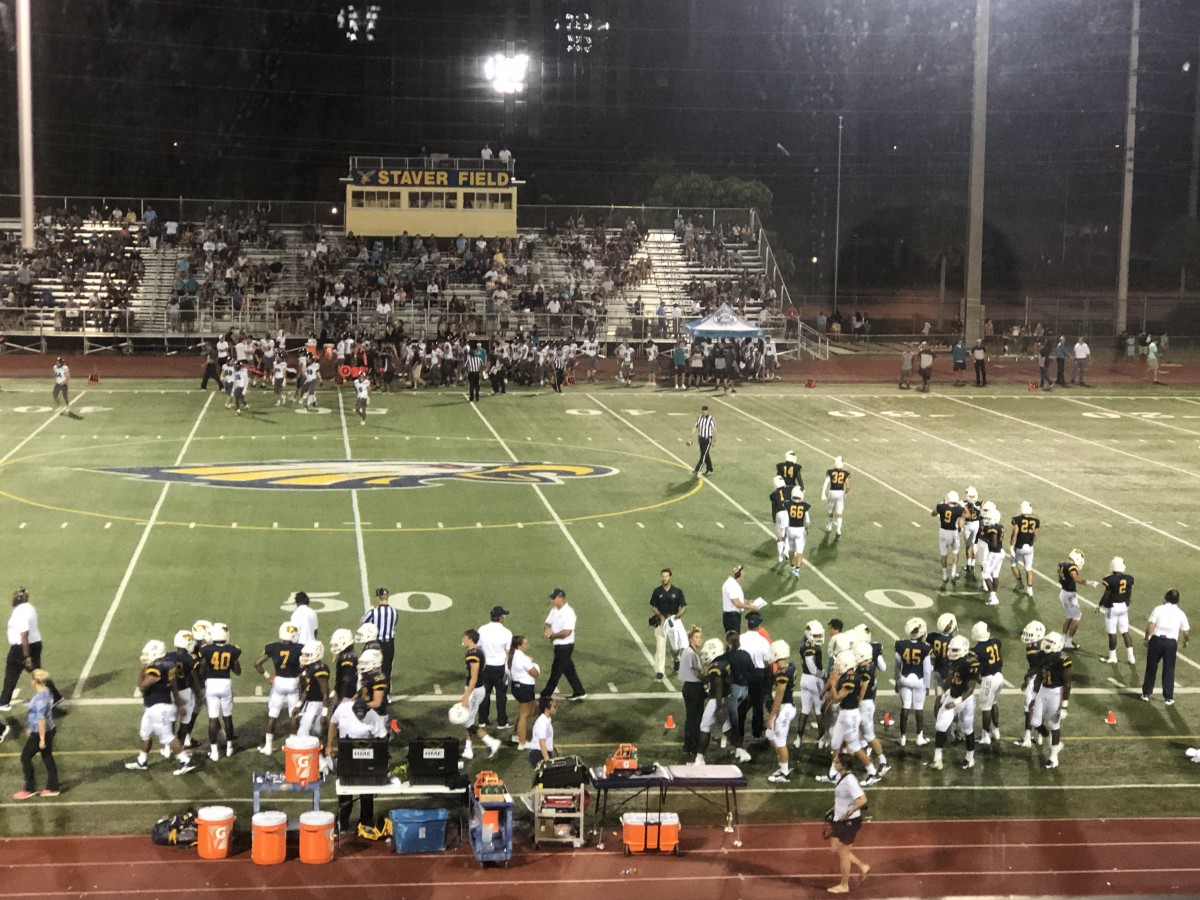 Naples football started the season on a high note after shutting out the Gulf Coast Sharks 49-0 in the Kick-off Classic, Friday Aug. 16.

The Naples offense went into the game with a new starting quarterback, sophomore Dominiq Ponder. Ponder threw for two touchdowns, one to Paul St. Louis and the other to Dominic Mammarelli.

St. Louis had a solid game with a fumble recovery and a 17 yard touchdown. Ponder was able to connect to tight end Mammarelli for a 29 yard touchdown pass leaping over the goal line.

Running back CJ Dietzel also had a productive, rushing for two touchdowns before the end of the first quarter.

The Golden Eagles were in control 28-0 going into halftime.

“High school went by too quick but, I’m excited to be back on the field with the team,” senior running back CJ Dietzel said. “We have high expectations of winning and going far this year.”

Some seniors are more relieved to be in their final year and are excited for this upcoming season.

“It feels good to finally make it to senior year,” offensive linemen Nick Arnold stated. “I have high expectations both on the football field and in the classroom. I believe we can go far this year.”

The Golden Eagles’ defense had a lot of question marks coming into this game. How would this defense do after Coach Dollar left? Would the new defensive coordinators Cliff Greer and Mike Sawchuck step up?

These questions quickly faded after sophomore Devin Moore intercepted a pass with 7:25 in the first quarter.

Defensive players like Brady Webre weren’t worried by any means. They were pumped up and ready to go for the season.

“This team has a lot of potential and heart. We believe we can go far this year,” Webre said. “The offense is rolling and have a rock solid defense that’s going to be hard to get points against.”

The football players believe this win puts them in a good place and will have momentum going forward into regular season.

“I’m very confident, our team this year is all in and everyone is willing to put the work in to succeed on Friday night,” senior Jack Kane stated. “Our first game showed that and we hope to carry that out the rest of the year.”