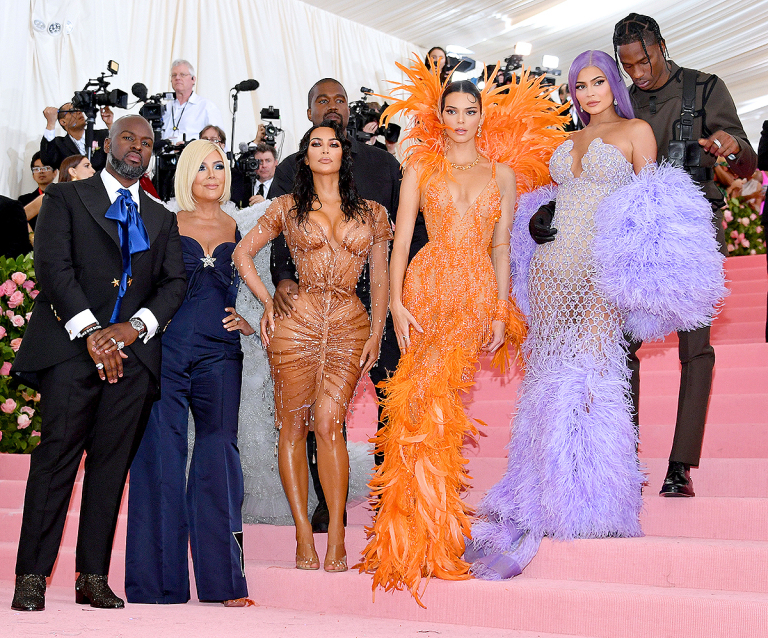 The Met Gala is one of the most important days to many fashion junkies like myself.  This years theme was Camp, which is an aesthetic style combining both bad style and high-end art.

Designers collaborate with famous musicians, models, actors and influencers to create a masterpiece fans love or hate. Here are some Hots and Nots of the 2019 Met Ball. 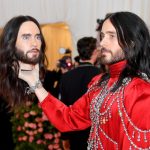 Leto wore a long sleeve gown which was a vibrant red with a diamond body chain that draped over each shoulder and made its way down to the ground. To add to the Camp theme he caused uncomfort by carrying a prop that definitely turned heads. A replica of his elegant face, ocean eyes, and silky hair was carried in one arm for an extra effect. The decapitated head purse made its first appearance during the 2018 fall Gucci fashion show in Milan where models also carried replicas of their heads. 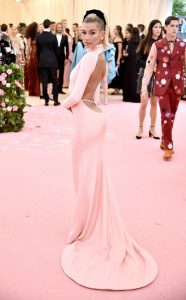 Holy Bieber fever! Even though Bieber was dateless, she didn’t need the extra arm candy. Hailey wore an elegant pale pink gown that was backless and exposed a high-waisted faux thong detailed with crystals that spelled out Wang for an extra touch of amazingness. The dress was topped of with a high pony paired with a black ribbon. I personally think her dress didn’t live up to the camp expectation, but she made up for that by looking absolutely stunning and motivating me to go to the gym everyday until I look like her. 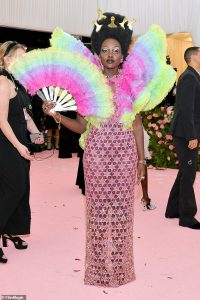 Lupita Nyong’o perfected the camp theme by wearing a pink star patterned gown and wing like rainbow ruffles on her shoulders. Nyong’o added some funk with a halo of gold hair picks in her large Prince-like Afro. I can’t forget to mention her amazing fan that matched her rainbow wings, which she casually fanned herself with in front of the cameras like a queen. 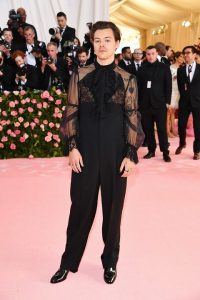 Harry Styles was unrecognizable. If his outfit was a song it definitely would be off key. I understand that he was trying to dress as Camp, but his jumpsuit number with sheer sleeves was scaring the children. Also, I am sure pretty his nipples were visible and the Met Gala isn’t a free the nip campaign. Great singer but maybe he should stick to that instead of trying to make bold fashion statements.

Is it a box? Is it a boat? Is she trying to sneak in a four-course meal? I just don’t know. Liza Koshy attended the event wearing a pink feathery box-like figure with a glittery undergarment, which was long sleeved. Her hair reminded me of a horse’s tail at a polo match. It was wrapped in a silvery ribbon that added an edge, but didn’t go at all with the outfit. The whole look was way too busy, but I’m still going to watch her YouTube videos! 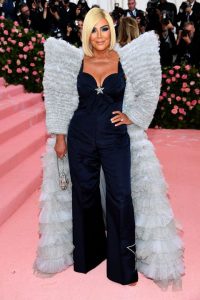 I’m just going to lay it out there, when you get older ACT YOUR AGE. Kris Jenner made her appearance on the pink carpet wearing a platinum blonde wig that totally distracted from her outfit. That may be a good thing because the ridiculous baby blue cape, the navy blue jumpsuit (which absolutely does not match with the cape), and the electric blue eye-shadow made her look like a walking blueberry. I definitely will give her props for looking so good for being in her sixties, but honey don’t dress like your 21 year-old daughter.

The Met Gala is the ultimate fashion prom that I someday dream to get an invite to, as I suppose many others do. The fashion is amazing no matter if it’s bad or good. For example, Katy Perry wore a chandelier and I would like to give her props for not getting electrocuted. Personally I may never wear something like that but the creativity and effort put into that is probably unimaginable. I am already counting down the days for the next Met Gala!