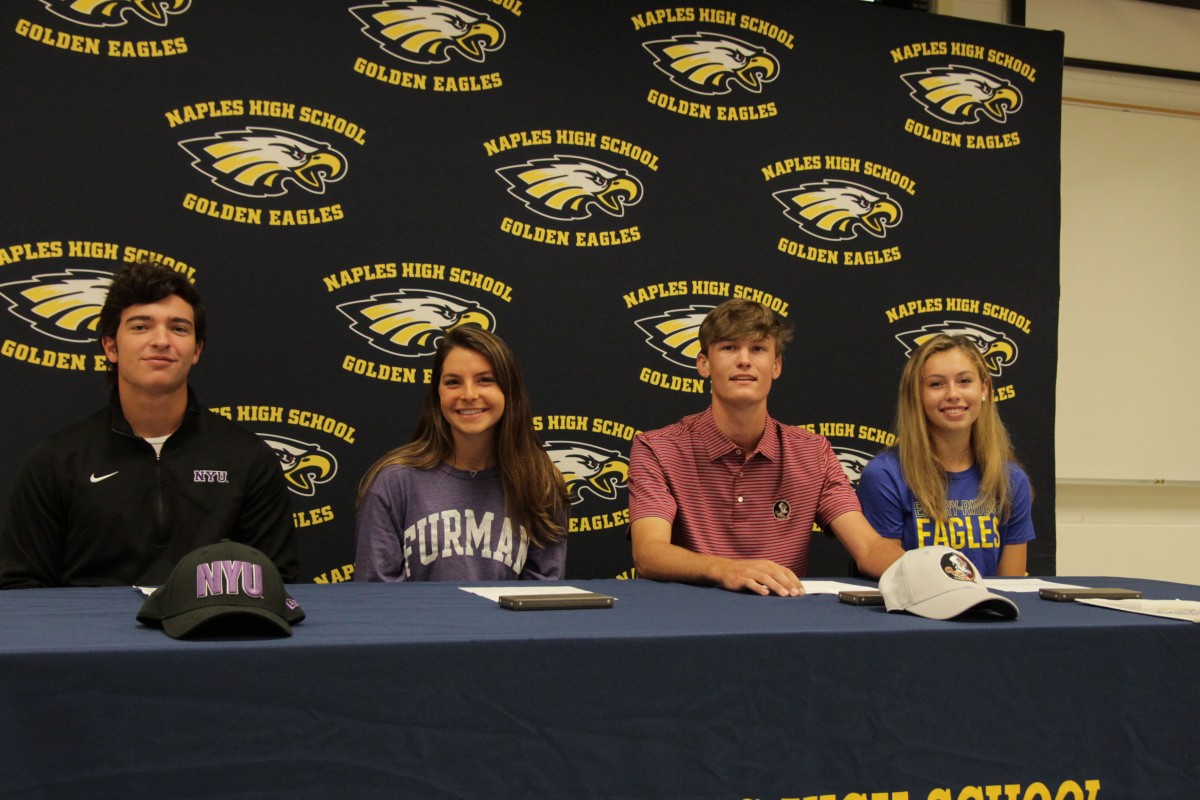 Four seniors signed their letters of intent this Wednesday with their chosen colleges. All students were congratulated by their friends and family on this next big step in their lives.

Gabe LaCagnina has been an integral part of the Naples baseball team since his first year. His energy and motivation is paired with his athletic ability, such as his impressive batting average of .364 in his first year on varsity.

LaCagnina will be heading to NYU, and he believes his new school will be a great fit for him. He says he’s always wanted to go to a big college. Although he looks forward to the years to come, he will miss his time in Naples.

“I’ll miss all the friends I had on the team because those were the best friends I’ve ever made,” LaCagnina said. “We grew our friendships through times such as our annual Keewaydin and Fort Lauderdale trips.”

Talented golfer, James Tureskis, is excited to be able to play at a prestigious Division I school. One reason FSU appealed to him is because he gets to stay in Florida. He will also be able to play year-round. Another factor that helped sway his decision is the fact that FSU invested eight million dollars into their golf course to make it top-notch. James believes his hard work has paid off.

“I started in fifth grade and practiced everyday for multiple hours, but I also enjoyed the game making me more successful,” Tureskis said.

Ashlee Lykins has a natural talent when it comes to softball, as she can play almost any position with ease. In high school, Ashlee has mainly played as shortstop and pitcher, but she committed to Furman as a center fielder.

She has been nominated for player of the week multiple times for her abilities and was also a finalist for the Naples Daily News Softball Player of the year.

“I will miss my teammates the most, because we were able to bond throughout the years,” Lykins said. “I will also miss how exciting high school ball was, and the fun that comes along with it.”

Sallie Squire is a new addition to NHS this year, but she is not new to the sport of lacrosse. At her old school in New Hampshire, she and her team won three state championships. For Sallie, Embry Riddle has a strong program in what she wants to major in and eventually go into as a job in the future.

“This will be my first year here, but I still have had a great experience so far meeting these great new people,” Squire said. “And a word of advice is to always be confident and never shy away from a challenge.”

These athletes have had their fair share of tough times, but their dedication to their sport has helped them persevere and become successful in what they do.

“They are the very best that we have… they’re talented, but the amount of work and dedication that goes into what they have just achieved is pretty significant,” Athletic Director Ernie Modugno said. “They are all talented athletes, but without the work they have had to put in, they would not be here right now.”