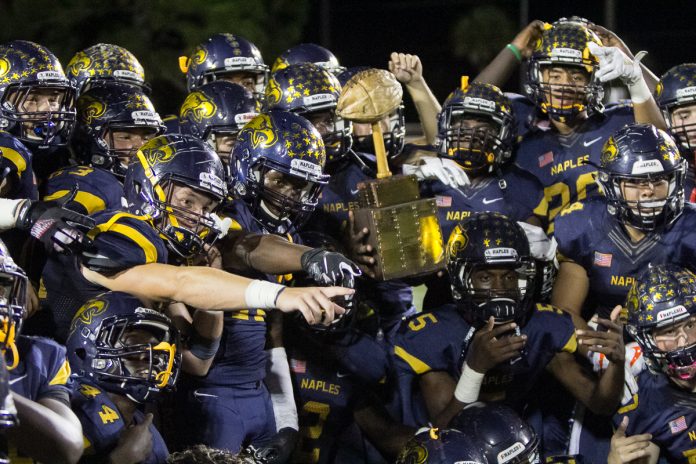 With 22 seasons in the bag, Naples head football coach Bill Kramer hangs up his coaching cap. Kramer’s resignation was announced Nov. 21. He leaves his position after much thought and prayer, saying simply that “it was time.”

Kramer kicked off his own football career at Yuma High School in Arizona and continued with collegiate athletics at Liberty University in Virginia. Prior to becoming a Golden Eagle, he coached for 11 years at Hialeah- American High School in Miami.

The coaching prowess he brought over from Miami only flourished into a resident powerhouse of a program in the area.

The turning of the tides in SWFL football might be marked by the 1999 win Naples had over Barron Collier, who at the time was the team to beat locally. The Golden Eagles also had another team to take down: the Lely Trojans.

The win-loss record for the annual Coconut Bowl stands at Naples: 30 and Lely: 15. For 19 times out of the last 22 Coconut Bowls, NHS has taken the nut from rival Lely High School under Kramer’s coaching.

Many Golden Eagles, whether it be staff or students or the community of Naples, recognize Kramer for molding multiple people into not only great players, but great people.

“There are two kinds of people in the world: Golden Eagles, and those who want to be Golden Eagles.”- Bill Kramer

“Over these many years, Coach Kramer and his staff have touched the lives of hundreds if not thousands of NHS student athletes in very positive and in some instances life changing ways,” athletic director Ernie Modugno said. “This has made them not only really good football players but more important: better human beings.”

Kramer is said to have inspired football players to prove themselves in the program despite facing injuries or obstacles. Although injured players are unable to continue the season, Kramer has pushed them to participate in various ways.

“I want to thank him for always being there for me and for giving me an opportunity to be apart of this amazing program even though I was injured,” junior Alex Brown said.

Brown tore his labrum in a football practice his sophomore year. He says Kramer has prompted him to participate in every practice and game by helping on the sidelines, filming football plays and providing players with anything needed.

“I will miss the determination of Coach Kramer and the willingness to help individuals,” Brown said.

Many players express they have formed meaningful connections even off of the field. Brown, for instance, has known Kramer since he was a baby. His grandfather, Gary Brown, hired Kramer during his time as a principal at NHS.

“I don’t know who the next head coach will be, but I know they will continue to carry on the legacy,” Brown said.

The Naples High staff is currently unsure who will be taking over for the position of head coach. However, those interviewed are confident that the next coach will continue to bring in the wins for the Golden Eagles.