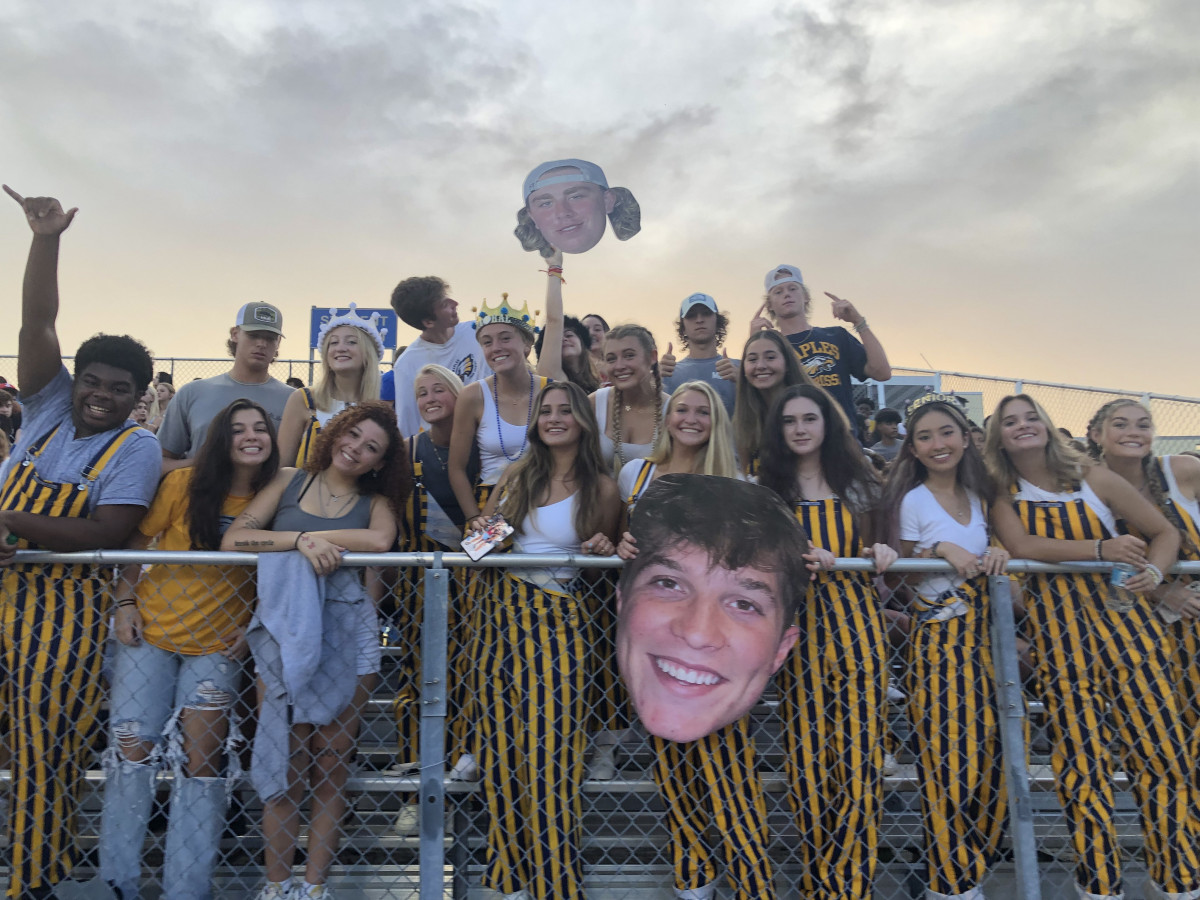 The Kick-off Classic this year set the tone for Naples High School spirit coming out of the pandemic. The stands were overflowing with freshmen, sophomores, juniors and seniors sporting gold beads and school colors. The seniors were especially visible in their game day bibs and senior crowns cheering while holding up fatheads of players on the football team.

One noticeable element missing from this scene were masks.

For many NHS freshmen and sophomores, the Kick-off Classic was the first football game that they were allowed to attend as high school students. Last year, mask mandates and social distancing guidelines restricted how many people could be in the stands and deterred many students from watching games.

“I have never been to a Naples High School game with my friends, only with my older sister,” freshman Karl Ghorayeb said. “I am excited because now I get to actually go as a student and support the team.”

Traditionally, seniors have set the tone for school spirit during the school year. Spirit bibs, a favorite of seniors’ since they were first introduced two years ago, were sold out within the first week of advertisement.

“The seniors have so much spirit this year compared to years before,” junior Ella Perry said.

Unlike freshmen and sophomores, most juniors were able to experience football games before the pandemic. Perry believes that the seniors this year are trying to make up for the last school year’s lack of school spirit.

“This has been the best game I have been to spirit-wise,” Perry said. “It’s the loudest, and I think everyone is super excited to be here.”

Spirit bibs have been a popular topic during the first few weeks of school because so many seniors rented out bibs that a waitlist had to be created. Junior Havana Layton believes that this is a good sign for school spirit.

“I’ve definitely seen an increase in the number of bibs as the years go on,” Layton said. “I plan on getting one next year!”

Increasing school spirit has been a topic of discussion amongst students and staff for years. Senior Mina Drlijaca, who moved from Chicago this past year, expressed some ideas that might prompt students to be more spirited.

“At my old school, one elected hype guy in the front controlled the whole spirit section and encouraged students to cheer,” Drlijaca said. “They even had a petition to get a live cougar for football games.”

Although it is most likely unfeasible for Naples High to get a live bald eagle mascot, school spirit may benefit from ideas like these. Student Government Association (SGA) Executive President Coral Morley has hope for this year’s senior class.

“I believe the seniors this year are off to a good start,” Morley said. “So far, they have mostly participated in all of the football themes this year and plan to go all out for homecoming week.”

Last year, SGA was incredibly limited in their ability to plan school events such as homecoming week, pep rallies and prom. As a result, school spirit was hard to come by.

“Naples High has a need for school spirit more than ever after being so restricted last year,” Morley said.

SGA is in charge of planning most school-spirit related events. This year, Morley wants to see an increase in in-person school events that many underclassmen have not had the chance to experience.

Although seniors are off to a relatively good start school-spirit wise, it is still the beginning of the school year. Morley hopes that seniors do not lose their school spirit as the year moves forward.

“I want our seniors to go big this year,” Morley said. “Go Eagles!”

Differences between online and in-person learning