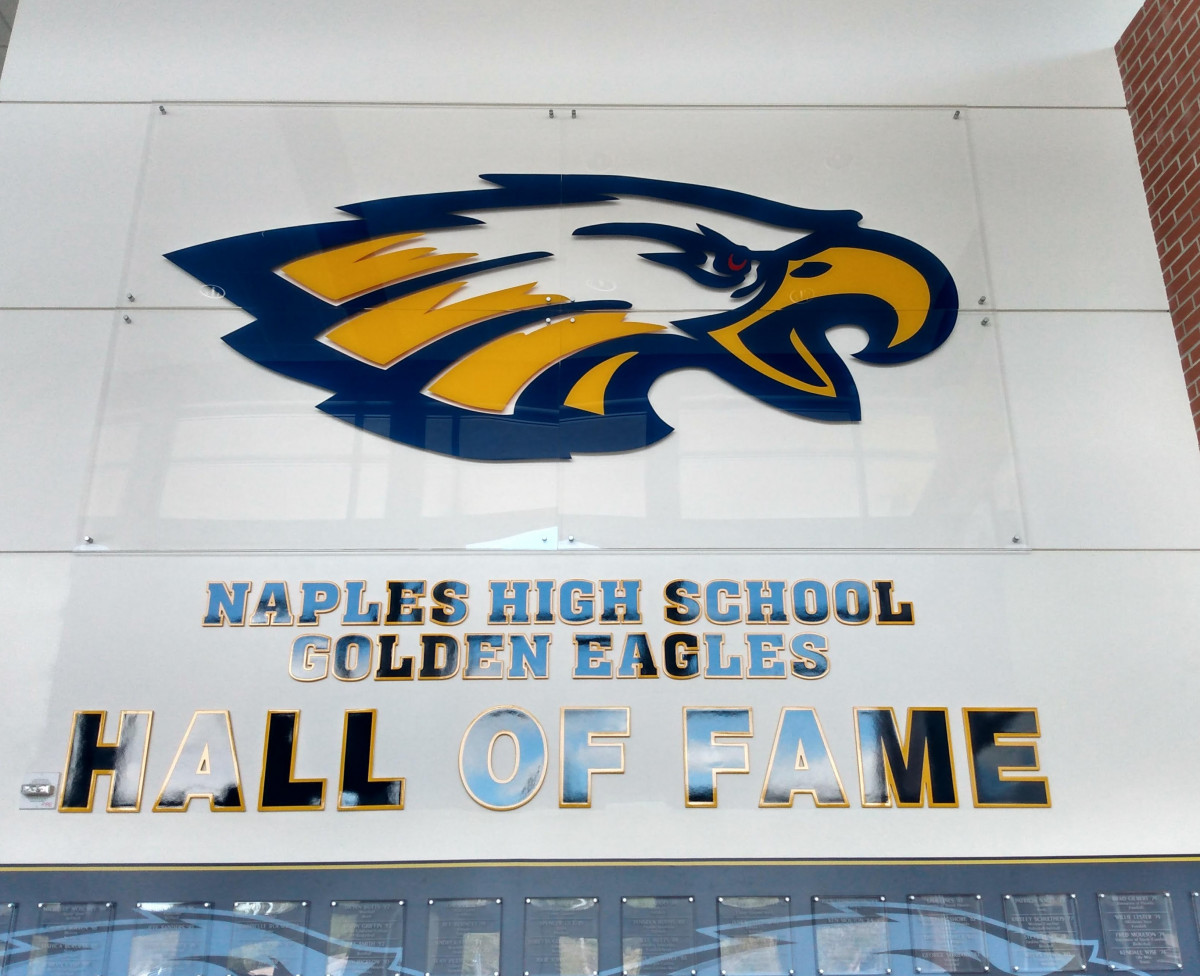 The Golden Eagle Hall of Fame is a place where students and teachers will leave their mark on the school. Achievements and awards are seen everywhere, ranging from championship trophies to recognitions for students who have taken their sport to the collegiate level.

“I think earning a spot in the Hall of Fame is a huge honor at Naples High where there’s a lot of other individuals every year,” former student-athlete Micheal Stamps said. “I do feel proud at the end of the day for being there. I put in a lot of work to be able to get to a position where I could be in there.”

The original Athletic Hall of Fame was built in 1988. The funds were raised by the senior class of that year and was dedicated to their classmate Rob Neinas, who passed away when he was a sophomore. In the Hall of Fame, there is a large eagle sculpture that reads: “Naples High School Hall of Fame – In Memoriam – Charles Lykins – Class of 1977.” Behind the bronze plaque is a time capsule which is scheduled to be opened on Oct. 19, 2034.

There are many different sections in the Hall of Fame, including 15 large illuminated display cases holding FHSAA State Series Team Championship awards. Also included in the Hall of Fame is the Wall of Athletic Recognition, which is designed to recognize the achievements of student-athletes who played a sport at the collegiate level. There is also the John R. Woodruff and George B. Pittman Awards designed to recognize and honor students who have made outstanding contributions to NHS in athletics.

After being inducted into the NHS Hall of Fame, Micheal Stamps decided to go to college and play at Ave Maria University. After that, he went back to NHS to coach weightlifting and football while attending Florida SouthWestern State College. He then transferred to Arkansas Tech University to earn his bachelors in journalism.

“I’m currently managing a deli and taking care of my grandparents,” Stamps said. “I’m moving to Colorado next year to attend culinary school to eventually write about food. I’m also training to go professional with powerlifting.”

Tate Hansen, who graduated in 2019, is playing JUCO-level baseball at South Florida State College where he’ll graduate with his AA degree. He recently signed his letter of intent to continue his studies and athletic career at Florida Institute of Technology. He is honored to be in the Golden Eagle Hall of Fame and is appreciative of this recognition.

“I feel like the Hall of Fame is an accomplishment,” Hansen said. “Not many kids get the chance to go to college and pursue their athletic career after high school, so it’s definitely something I’m excited to be a part of.”

It takes time and effort to get into the hall of fame, so those who want to get in need to dedicate time to getting in. Tucker Hansen, a varsity player on the Naples High baseball team, is proud of his older brother, Tate Hansen.

“I think that it’s a big achievement,” sophomore Tucker Hansen said. “I believe he got in because he always put extra work in and helped his team.”

“For sure, it’s not an easy accomplishment,” Tate said. “I put in a lot of work to be able to play baseball at the collegiate level. I’m very proud to be in the position I am today.”

A Student’s Guide to Transeo