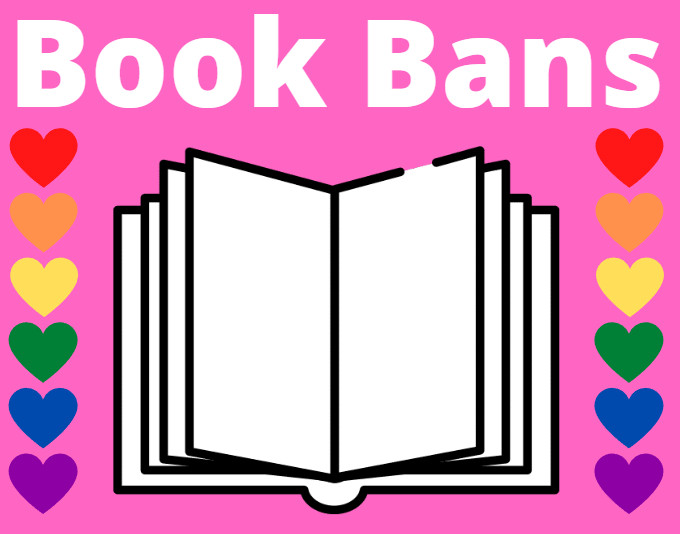 Recently, conservative groups have been trying to ban books in school libraries due to a variety of reasons, one being related to the LGBTQ+ community. With these books being banned, less representation is given for LGBTQ+ youth. Teenagers who want that representation cannot find it in their schools since these books have been marked as explicit. Banning these books can negatively impact teenagers who are having questions about their identity and sexuality.

Those who are questioning their sexuality cannot find any books that would allow them to figure out who they are, leading to a multitude of questions and confusion. However, the bigger problem is that the books are being banned unjustifiably.

Simple children’s tales are being banned for containing queer representation, such as I am Jazz by Jessica Herthal and Jazz Jennings or And Tango Makes Three by Justin Richardson and Peter Parnell. I am Jazz was banned because it is “sensitive, controversial and politically charged,” according to Marshall Libraries. And Tango Makes Three was banned because the story was “unsuitable for young children” and has “homosexual overtones,” according to American Express.

These books are not inappropriate or explicit in any way, so there is no reason why they should be banned. The result of these books being banned is that kids are restricted from discovering who they are and forced to do so until later in life. Since LGBTQ+ books are not as accessible as heterosexual books in libraries, this loss of representation can hinder their social and emotional development for the future.

In order to prevent this from happening, bans on LGBTQ+ related books should stop so that young LGBTQ+ audiences have access to a sense of guidance in finding who they truly are.

According to The Trevor Project, 45% of LGBTQ youth seriously considered attempting suicide in the past year and nearly 1 in 5 transgender and nonbinary youth attempted suicide, with LGBTQ+ youth of color reporting higher rates than their white peers. The Trevor Project also stated that LGBTQ+ youth who found their school and environment to be LGBTQ-affirming reported lower rates of attempting suicide. This level of support could be reached through books that educate and destigmatize the community.

Adding more representation to libraries and schools can positively impact LGBTQ+ individuals. It would destigmatize the community and bring awareness to the issues and experiences that these people face. Banning these books are not benefiting anyone and are raising close-minded children to believe that this community is harmful, causing many to be discriminatory against it. This is the reason why removing these books only has negative impacts, and we really need to think about the harmful consequences to prevent this from happening any longer.

Why schools should bring back home economics