NHS Talon Tribune
Home Features The Trick Behind the Flip 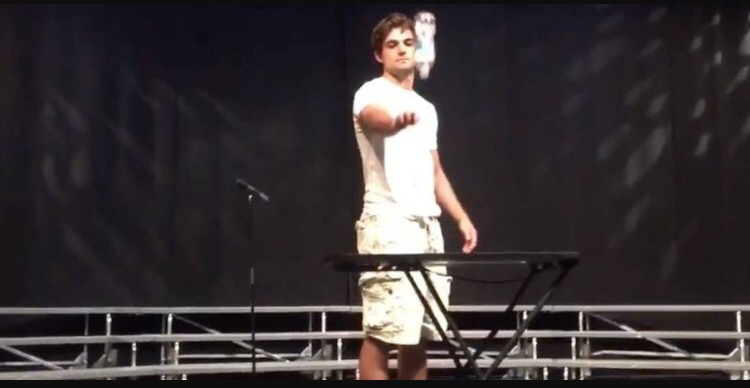 A video of high schooler Mike Senatore flipping a water bottle onto a table for a talent show act went viral and swept the internet. The crowd went crazy when he perfectly landed the water bottle on the table. The trend has now made its way from the internet into local classrooms.

Social media users around the world have been inspired by Senatore’s act, imitating the bottle flip and taking it to the next level. Videos showing people flipping water bottles onto their shoes, heads, other water bottles, and even on a McDonald’s sign have blown up the internet.

Some may argue that this challenge is pointless, but it must not be pointless enough because social media users all over the world have been trying to imitate this simple, though very impressive trick.

There is definitely something more to it than simply getting lucky. Some flippers noticed that one can not perform the trick with too little or too much water inside the bottle. It’s best to fill about ¾ of the bottle and hold it by the top. Flip the bottle and let inertia do all the magic. Of course, practice is also a very important part of the process of getting this right. You can’t expect to flip the bottle perfectly after the first couple of tries.

Students from Naples High School confess that they have tried but failed the challenge.

“It’s too much pressure for me,” freshman Conrad Smith said. “I can’t handle the stress.” Nathalie Orange, grade nine added  “I never tried it but it looks hard to do.”

Most teachers despise the sound of bottles falling on the floor and don’t allow students to flip bottles in their classes.

“I’ve never done it but I’ve seen kids do it,” Mr Paul Horne, AP Human Geography teacher, said. “I don’t like it and it’s really annoying.”

Tips for finishing the rest of the school year