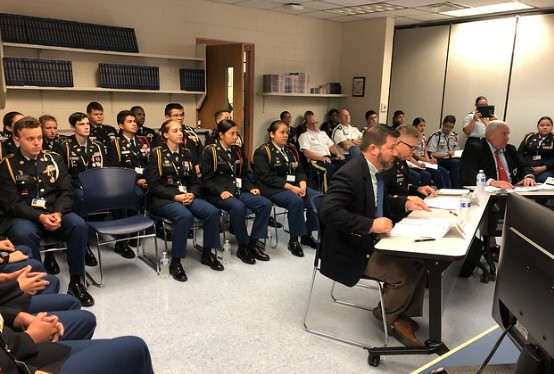 Naples High School JROTC students wear a small golden star to signify their overall exemplary conduct in the program, although many may not notice the small detail.

Following the Army’s annual inspection, NHS cadets get to find out if they’ve re-earned the star that represents the status as an Honor Unit with Distinction. This means a rank showing that the school achieved higher than a score of 95 overall.

“At first it was stressful I won’t lie,” drill team commander and junior Alexander D’Arco said. “However, seeing the inspector’s impressed expressions gave me a rush of happiness.”

D’Arco was hands-on involved with the drill inspection as its commander. The drill team was a 12 person group following a military command guideline that took lots of memorization and practice. D’Arco and his team had practiced after school for weeks prior for an hour or two at a time, all striving for nothing less than perfection.

Senior Helen Chinchilla will be unable to see the fruits of her labor for the next school year.

“As a senior in JROTC, I won’t get to stay to see the star be renewed,” Chinchilla said. “It’s the pride of knowing that it will be there that makes me proud.”

Chinchilla is a senior member of the JROTC Battalion staff as a fourth year cadet, her position entailing her to create the ‘operation order’ for each and every volunteer event the unit participated in. The order contains the where and the why, as well as specific information towards the event itself. It is a time-consuming but helpful job.

“We worked hard for months and it all paid off; it’s bittersweet that it’s over,” Chinchilla added.

Although the upperclassmen tended to be further involved with the inspection by using their experience and abilities to their benefit, a few first year cadets had the privilege of being a part of something bigger than the years before.

“Coming into the program, I had no idea why the JPA was such a big deal,” freshman Jack Skidmore said. “After going through it myself, I can see why everybody is so proud that we did so good.”

Throughout it all, the NHS JROTC celebrates their success for yet another year. Although their preparation for next year’s inspection won’t be as pressing and stressful, it will continue to fill them with a sense of pride in their own creations.