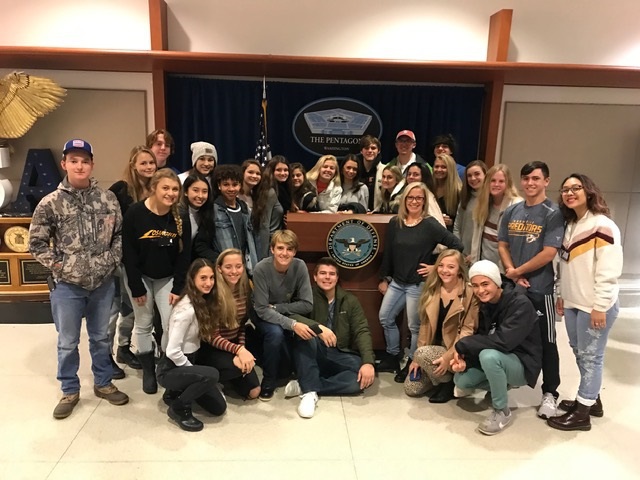 Winter Congress is set up like a mock government, where students from the northeast and southeast come together and debate bills they have previously written.

“At Winter Congress, we have opening and closing sessions sandwiching debate blocks, in which students verbally defend and renounce mock bills that they’ve previously written,” junior Chase Melton said. “We also do monument tours and sightseeing before the convention starts.”

Students in JSA travel a day before the convention starts to go sightseeing and tour our nation’s capital. Along with debating mock bills, JSA also discusses political and social issues.

JSA is a great way for students to stay informed on governmental processes and is a good club option for those interested in politics.

“JSA is the perfect opportunity for students interested in politics,” freshman Ella Perry said. “It’s a great way to stay informed while also learning government processes and debating your political views with like-minded students from across the country.”

Students do not have to know much about politics and the U.S. government to join. JSA helps students make friends and mature in an educational capacity.

“I knew nothing about government or politics or debating before I joined,” senior Emma Young said. “It’s a great way to make friends, and I feel like it really just helps you mature as a student.”

Generally, Winter Congress has many guest speakers, which can vary from Senator to Lobbyist positions.

“Typically, the guest speaker is somebody that might be a senator or representative, a judge, maybe a lobbyist,” Romero-Bettridge said.

Many of the guest speakers and government leaders are alumni of JSA.

“Many current government leaders are actually JSA alumni,” Melton said. “And the organization definitely provides you with the skills and knowledge you need to eloquently defend your claim in any argument or discussion.”

JSA not only helps students mature, but it also helps shape students overall and helps them learn to accept other people’s opinions.

“It has been an amazing experience and it has completely shaped me as a student,” Young said. “It has taught me to accept other people’s ideas and who they are and learn how to have an open mind with them.”

A week’s worth of summer activities

Past impacts of hurricanes and preparations for the upcoming storm season