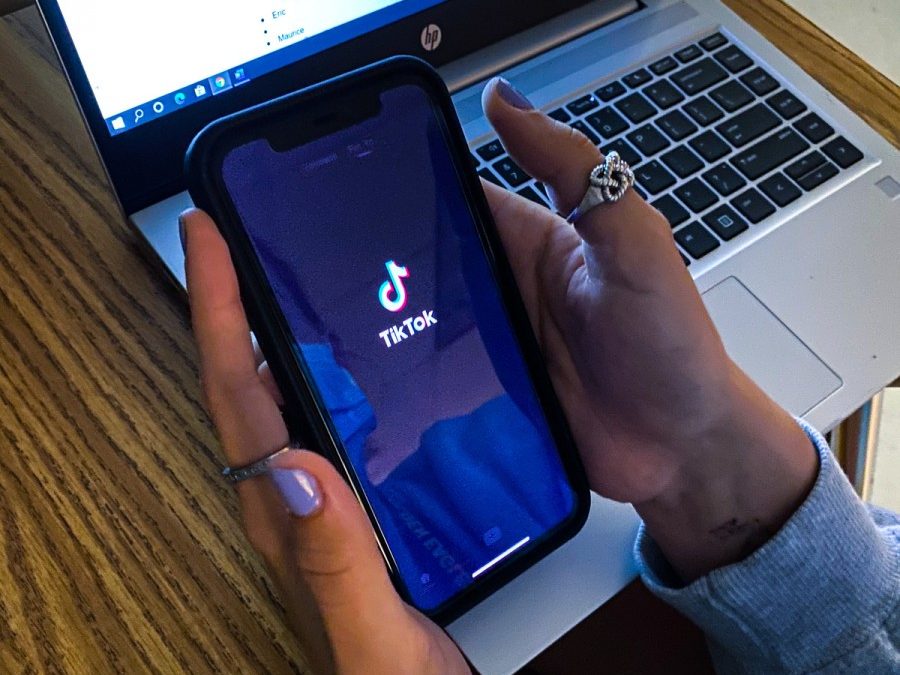 TikTok, one of the most popular apps in 2020, is a widely known social media app for teens and young adults. Due to the sudden rise in popularity, TikTok has amassed over 800 million users worldwide, and there is no doubt that the students of Naples High School are a small fraction of this statistic.

Sophomore Jesse Persad-Tirone has reached over 176,000 followers on TikTok for customizing shoes and other various types of content.

“I post this content just to show what it takes to do what I do,” Persad-Tirone said. “I show the process of how I do it…my followers really enjoy it.”

There is a lot of variety with the content posted on TikTok, ranging from comedy to cooking, to fashion. One of the most popular categories is dancing. The “Renegade” is one of the most well-known dances on the app, with around 29.7 million uses of the audio.

Junior Molly Richards has around 149,300 followers on TikTok, with her most viral video reaching 5.7 million views.

“I post dancing videos…I definitely spent more time on [TikTok] during quarantine since I had so much time,” Richards said.

Following trends and popularly used hashtags can often get you a couple thousand likes if you are lucky. Of course, this is the case for a handful of Naples High School students, despite the fact that “blowing up” is so rare.

“My first viral video was comedy…it currently has 1.8 million views,” sophomore Christian Dugo with 200,000 followers on TikTok said. “I like to make people laugh and try to give them something they can relate to.”

During quarantine, or “coronacation,” people all over the world began using the app more often after being at home for hours on end. This pertains to teens more than any other age group, with around half of users being from the age of 16-24 years old.

“[Quarantine] actually helped me…I gained a lot more followers during quarantine because I had more time to use the app,” Persad-Tirone said. “If it’s a day where I make videos I could be using [TikTok] for 2-4 hours.”

When teens are both making and viewing videos, this can keep them hooked for longer than they intended, and because of this, TikTok addictions are the newest stereotype regarding teens and Generation Z.

“I think my generation is misunderstood,” Dugo said. “TikTok is just a place for people to escape reality, and I think that’s why it is so addictive.”

Since TikTok mainly consists of younger users, there is no question that controversies and drama occur. These disputes surround both celebrities and regular teens, and they happen both online and in-person.

“Yes, there are controversies on here, but it’s the usual teenage drama…it doesn’t really matter to me,” Persad-Tirone said.

Not only are there disagreements on the app, but there are also disagreements about its existence. It may be too addictive and is becoming the new root of procrastination.

“It takes time away from your family and schoolwork,” Dugo said. “Half of my days are spent on TikTok.”

Students feelings on last semester and how they will improve