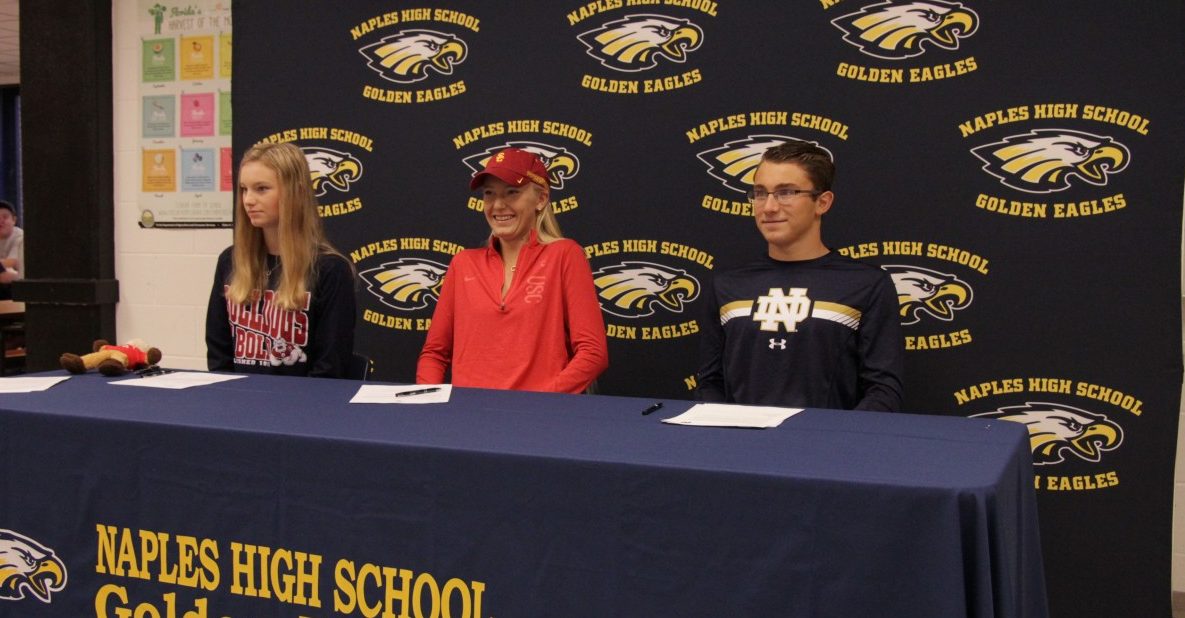 Matthew Limbacher chose to further his educational and athletic career with the University of Notre Dame. Despite being presented numerous opportunities from prestigious universities such as Columbia University and Northwestern University, he felt that Notre Dame was hands down the best option.

“I chose Notre Dame because of the environment, people, business school, and history,” Limbacher said. “It was such a wonderful place to be and I wanted to spend my four years on a tough team with a rigorous course load.”

In his senior season, Limbacher defended his state title in the 100 yard breast stroke, winning in back to back years. He broke his own school record with a time of 54.98 seconds.

He was named Naples Daily News Swimmer of the Year in 2016, and is a strong contender to earn that honor again this year. Matt was a team captain of the Golden Eagles swim team this year.

Hana Bieling signed with Fresno State University to compete in their equestrian program. Hana saw Fresno State as a perfect fit due to its size and the team’s chemistry.

“I like how it’s a smaller team and all of the girls seem closer,” Bieling stated. “They also have lots of opportunities, such as in the medical field.”

Hana’s list of equestrian accomplishments are very impressive. In 2016, she was the Champion 1st Overall National Small Pony and a World Champion Hunter Rider and Classic winner. Additionally, she qualified for the Maclay Regional’s, the ASPCA Finals, and the Medal Finals.

Alyssa Mayo signed to compete in tennis for the University of Southern California. Initially, Mayo was in talks to take her talents to Williams University, until the head coach got the job at USC.

“I was talking to the coach at Williams University, when surprise, she got the head coaching job at USC,” Mayo said. “So I followed her out there and fell in love with it.”

Alyssa earned two varsity letters on the Golden Eagles tennis team. As a freshman, she earned team MVP in addition to being a Class 3A Florida State Singles Semi-Finalist and Doubles Finalist.

A NHS Guide to Studying for Midterms after the Break