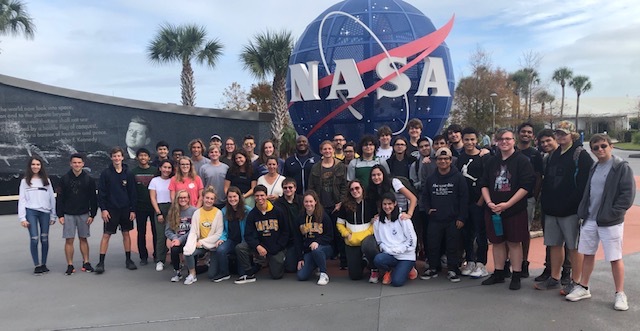 Selected students of the NHS engineering program went on a field trip to the Kennedy Space Center on Jan. 24, 2020.

“We got to tour the NASA facilities laid out,” Sarah McKnight, a freshman in Greer’s engineering class, said. “They had different commemorations for two different astronauts and different space shuttles and also learning facilities we got to see.”

Greer has been doing these trips for over three years and has taken his students to many different locations.

“This is probably the most extravagant one we’ve had though; it was the most involved, had lots of details and it’s the farthest we’ve gone,” Greer said.

Many of the students favored this trip because of one very well known attraction, The Atlantis. It is a space shuttle that belongs to NASA and was the second to last space shuttle built. It had over 33 flights to space, carrying an overall total of 207 crew members.

Students learned many new things that they did not know before going on this trip.

“I learned a lot about the space shuttle programs, especially the Apollo and Spatial, and the ones that flew and retired from 1981 to 2011,” Sebastian Cardona, a junior in Greer’s engineering class, said.

With funding from alumni and neighboring businesses, Greer has field trips very often. His next field trip will be taking place soon.

“We’re going to the Conservancy of Southwest Florida,” Greer said. “We aren’t going to focus on nature like most of the classes that go there. We’re actually going to be focusing on the construction process of the buildings that are located there.”

The pros and cons of working as a high school student

Saving the world one water bottle at a time